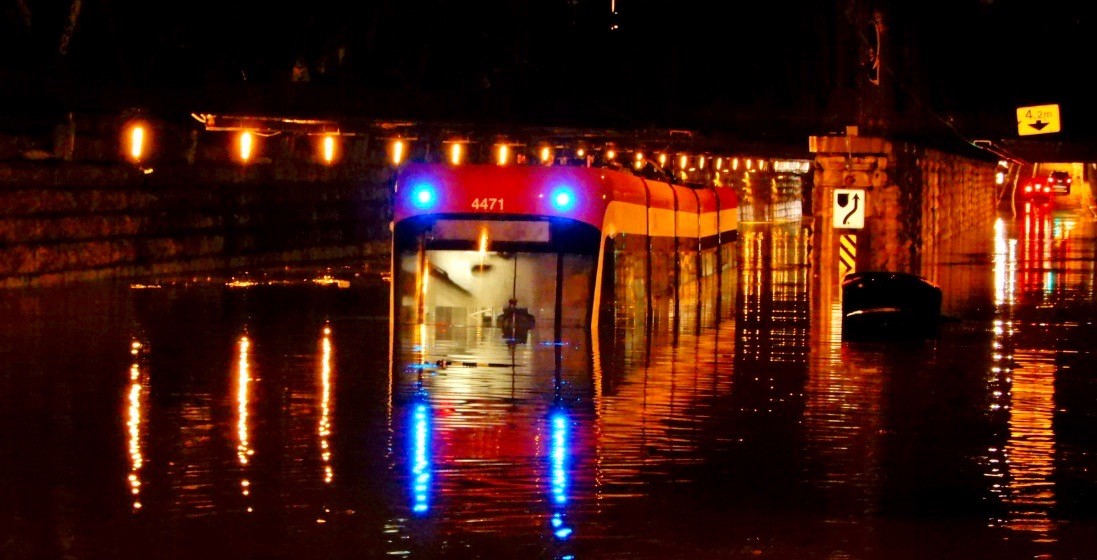 The Greater Toronto Area was hit was a slow-moving storm system Tuesday night that caused widespread flash flooding and power outages in several areas of the city.

The storm, which dropped close to 100 mm of rain in some areas of Toronto in under three hours, left roughly 16,000 residents without power due to a loss of supply from Hydro One.

The loss of power combined with the flooding resulted in Toronto Police services responding to numerous emergency calls, including one incident involving two men being trapped inside a rapidly-filling elevator.

At the height of the storm, Toronto Fire Service was responding to 71 emergency calls throughout the GTA, advising the public to be very careful around flooding and around any downed power lines.

71 active @Toronto_Fire calls ongoing at present. Please be very careful around flooding and around any downed power lines. pic.twitter.com/rK6T38e4D4

Flooding was severe in some areas as rain quickly overwhelmed drainage systems and flooded buildings and condos, roads and underpasses, which left many vehicles trapped and submerged by water.

While most of the city was safe indoors, a few brave souls who were outside managed to capture the storm in all its glory.

Here are some of the unbelievable pictures and videos of Tuesday’s intense storm shared on social media.

Downtown Toronto. It was a crazy walk after the Blue Jays game. Water was up past my knees! #onstorm #flooding pic.twitter.com/avX5oRxSzl

Toronto is flooding – Lakeshore W. Let’s not get swept away!!! #onstorm pic.twitter.com/TR579ZKsbs