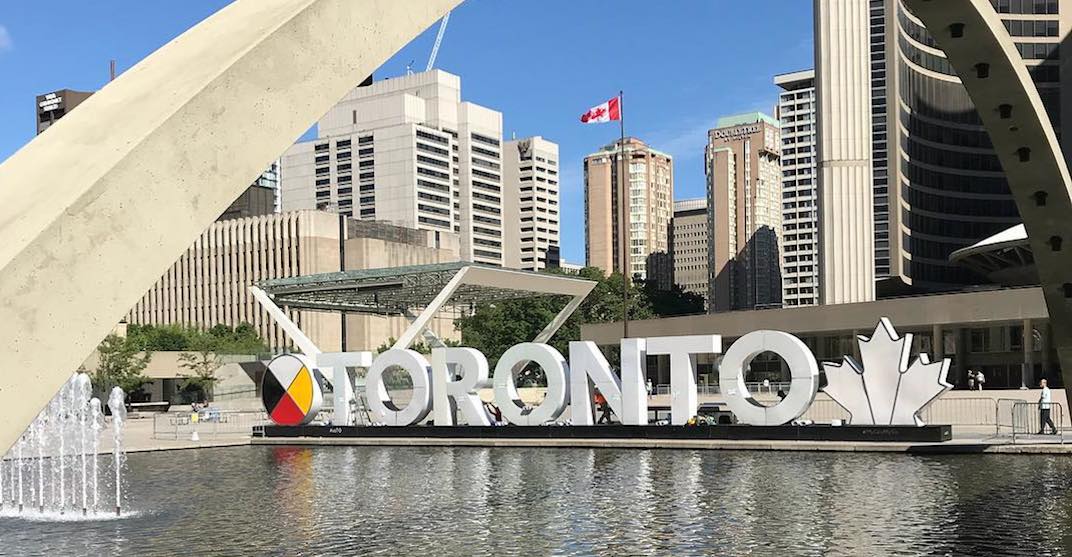 If you’ve passed through Nathan Phillips Square recently, you may have noticed that the iconic Toronto sign has received a very important upgrade.

In honour of the upcoming National Indigenous Peoples Day on June 21, a Medicine Wheel and a new vinyl wrap has been added to the Toronto sign.

In honour of National Indigenous Peoples Day on June 21, the City of Toronto is adding a Medicine Wheel and a new vinyl wrap to the Toronto Sign. News release: https://t.co/gZ2zncAEil #xoTO pic.twitter.com/JBqZNeYYen

The Medicine Wheel was positioned next to the sign’s ‘T’ and the vinyl wrap will cover the outside of the sign’s letters, resembling birchbark inlaid with symbols of significance for Indigenous communities.

The Medicine Wheel is an emblem of North American Indigenous cultural values, tradition and spirituality, and its four directions (east, south, west and north) symbolize completeness, wholeness, connectedness, and strength.

The Medicine Wheel will be on display through Canada Day weekend before returning to Nathan Phillips Square in October for the Indian Residential School Survivors (IRSS) Legacy Celebration taking place from October 9 to 11.

“Toronto’s Indigenous roots and the vibrancy and diversity of its Indigenous communities are reflected in the Toronto Sign,” said Councillor Michael Thompson (Ward 37 Scarborough Centre), Chair of the Economic Development Committee.

“In this way, we are proud to mark Indigenous presence, historical and contemporary, in Toronto.”

In case you haven’t had a chance to see the new sign in person, here are some photos recently shared on social media.