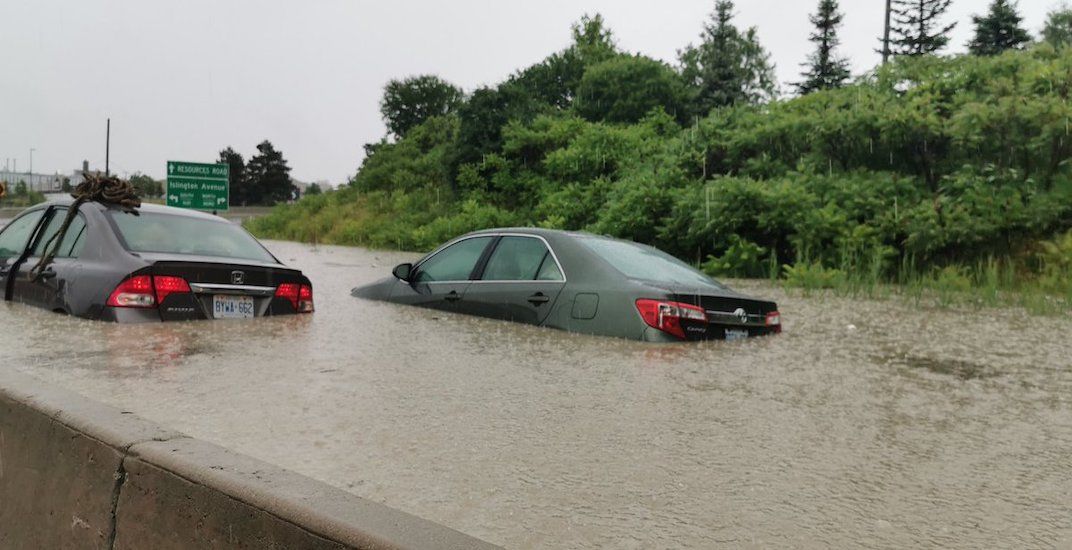 An intense and heavy rainfall on Wednesday has left Toronto roadways flooded and many vehicles submerged in water.

On Wednesday, Environment Canada issued a special weather statement for Toronto as up to 40 mm of rain was expected in the morning.

And boy, it rained alright.

Streets around the city were quickly flooded, and according to police, northbound and southbound on Kipling Street near Highway 409 were closed, however, the area has since reopened.

Additionally, the southbound Allen Road ramp from Highway 401 was closed to do high water levels.

As the rain continued to fall, a number of vehicles became submerged in water and had to be pulled out by heavy rescue crews.

Car Recovery from the flooding at #Hwy401 and Islington #onstorm @weathernetwork pic.twitter.com/xCKvo6AYol

Cars were full of water. We drain those water out. #onstorm #GTA #flooding weather pic.twitter.com/y8QrxkJNZx

Flooding everywhere ! Over an hour to go 20km. Many side streets. This is under the 400 at Wilson stranded cars all over #flooding #Toronto pic.twitter.com/EJXNqrPe8J

Crazy flooding all over the roads in Toronto. Took me over an hour and several detours to make it into the office. This is St.Clair and Jane. #Toronto #rainstorm #torontoflood pic.twitter.com/iUXj8Kh9xA

The TTC has also warned that flooding is causing delays on many of their routes.

⚠️ Hi everyone – the heavy rainfall is affecting many of our routes right now, with diversions in some places and others running behind schedule due to surface water and slower moving traffic. Please allow for extra travel time. 🌧️ ^KJ

The Toronto and Regional Conservation Authority (TRSA) issued a flood warning Wednesday afternoon after some areas received more than 80 mm of rain in less than six hours.

“Due to the heavy rainfall moving across the GTA, rivers within the GTA are experiencing high flows and water levels,” a TRSA statement said.