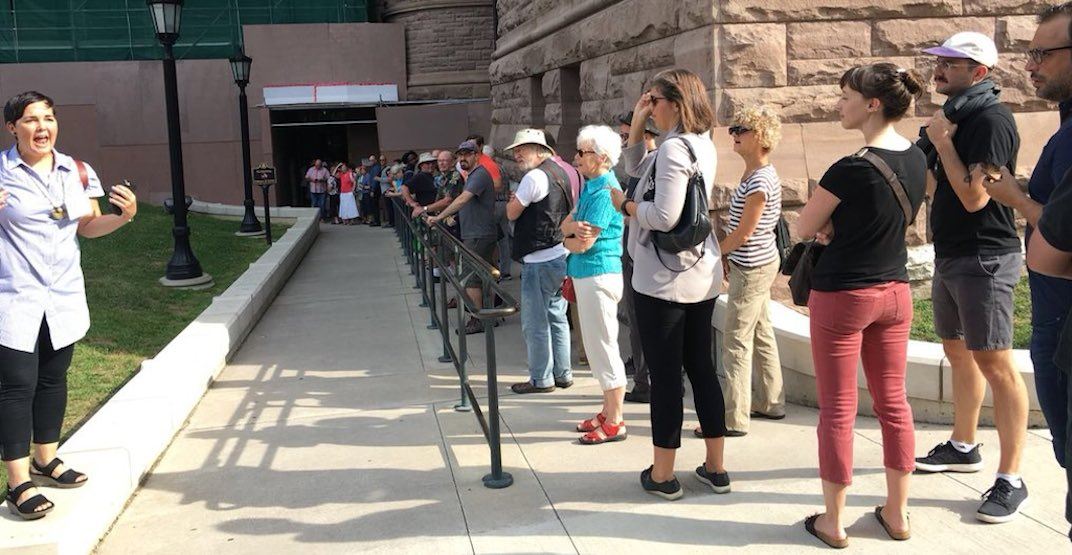 After Premier Doug Ford announced the province’s plans to cut Toronto City Council nearly in half ahead of the upcoming election, some Toronto residents have had enough.

On Thursday morning, hundreds of people lined up outside of Queen’s Park, trying to get a seat inside during a question period to protest Ford’s latest move.

Over 400 people are lined up to get into Queen’s Park to tell Doug Ford they don’t support his interference in Toronto’s elections and attempt to run Toronto from Queen’s Park pic.twitter.com/NjSSc5lmSi

Hundreds here on the lawn who couldn’t get into Queen’s Park to make their voices heard on Doug Ford’s election plans. The gallery is packed – it can only hold a little more than 200. #onpoli #topoli pic.twitter.com/HL4JzLF4GI

My attempt to photograph the amount of people at Queen’s Park to protest Doug Ford’s interference in Toronto’s election. #ONpoli #TOpoli pic.twitter.com/C3CsJf0AoL

Around the corner and down the east side of Queen’s Park. Please join us if you can. We are #TOpoli. #ONpoli #Bill5 pic.twitter.com/5d5Wk1Xh5V

Democracy in action. Hundreds of people lined up to get into Queen’s Park to protest changes to the Municipal elections in Toronto. #ONPoli #TOpoli speak up speak out.! pic.twitter.com/1S2mYpjHCE

Line up outside Queen’s Park to pack the public gallery in protest of Doug Ford trying to rush council cutting legislation through… #TOpoli #Onpoli pic.twitter.com/3IrMaKvvIN

According to Toronto City Councillor candidate Jennifer Hollett, those who made it into the packed gallery were required to check their phones and notepads at security and they aren’t allowed to speak, cheer, or boo.

While we have to check phones and notepads at security, and aren’t allowed to speak, cheer, or boo in the gallery, our presence today makes a loud statement.

Those who didn’t make it into the gallery showed their support by holding signs and rallying outside of Queen’s Park.

With less than 24hrs notice well over 800 people have shown up to tell Ford to take his hands off Toronto. Hundreds are inside Queen’s Park and hundreds are rallying outside. #ONpoli #ToPoli #OurCityHall pic.twitter.com/Ypq4eg4Ytv