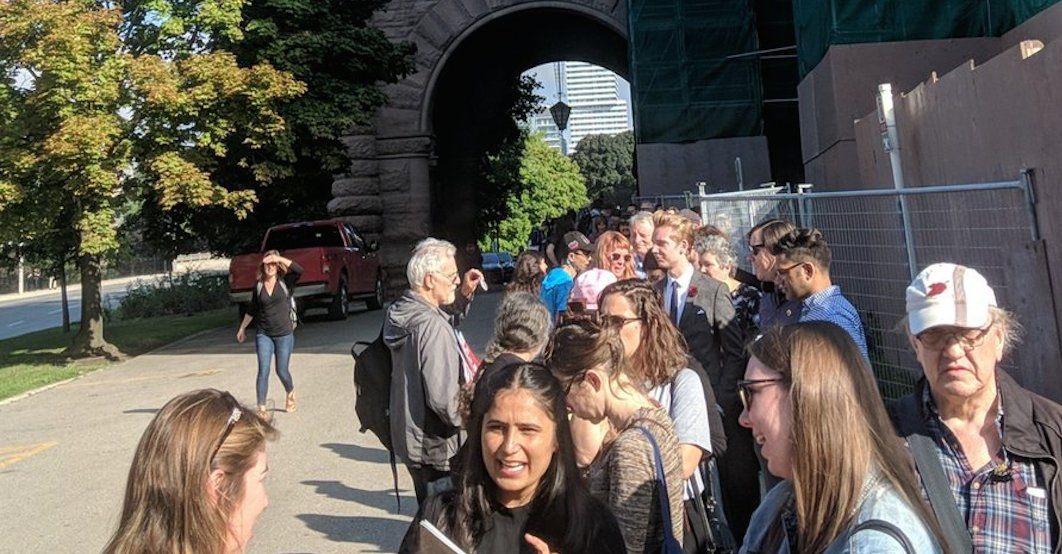 After Premier Doug Ford announced he will invoke the Constitution’s notwithstanding clause to override Monday’s court decision on Toronto City Council, some Toronto residents have had enough.

On Wednesday morning, hundreds of people lined up outside of Queen’s Park, trying to get a seat inside during a question period to protest Ford’s use of the notwithstanding clause to slash council size.

Protesters lining up to get into public gallery at Queen’s Park #onpoli pic.twitter.com/a6M5HUshnc

Waiting, waiting in a huge line to get into question period at Queen’s Park, but they’re delaying letting us in. Another swipe at democracy. pic.twitter.com/kg7PRjde8V

Wicked turnout here to pack the gallery at Queen’s Park – no to cuts, no to the notwithstanding clause, and no to this government. #onpoli #topoli pic.twitter.com/y6jUqm1Jb7

An incredible turn out at Queen’s Park this morning! The line of people still waiting to get into the gallery is wrapped arond the building #onpoli #TOpoli pic.twitter.com/lArdrd2mdx

According to MPP Michael Coteau, the question period was briefly delayed due to hecklers, and the public gallery was cleared out and protestors were handcuffed and cleared out of the building.

Queen’s Park public gallery has just been cleared, protesters being handcuffed &cleared out of building, legislature in recess. People are angry at the unprecedented use of the #NotwithstandingClause …& @fordnation calls Toronto city council dysfunctional?#onpoli #TOpoli #bill5 pic.twitter.com/R5kT5CiBz8

After Ford kicked everyone out of the public gallery, hundreds of Torontonians outside of Queen’s Park began chanting “Let us in!”

After Ford kicked everyone out of the public gallery — the very people opposed to his attempt to override our charter rights and democracy — hundreds of Torontonians outside Queen’s Park rally and chant “Let us in”. #topoli #onpoli #bill5 pic.twitter.com/Le5eBOnAVP