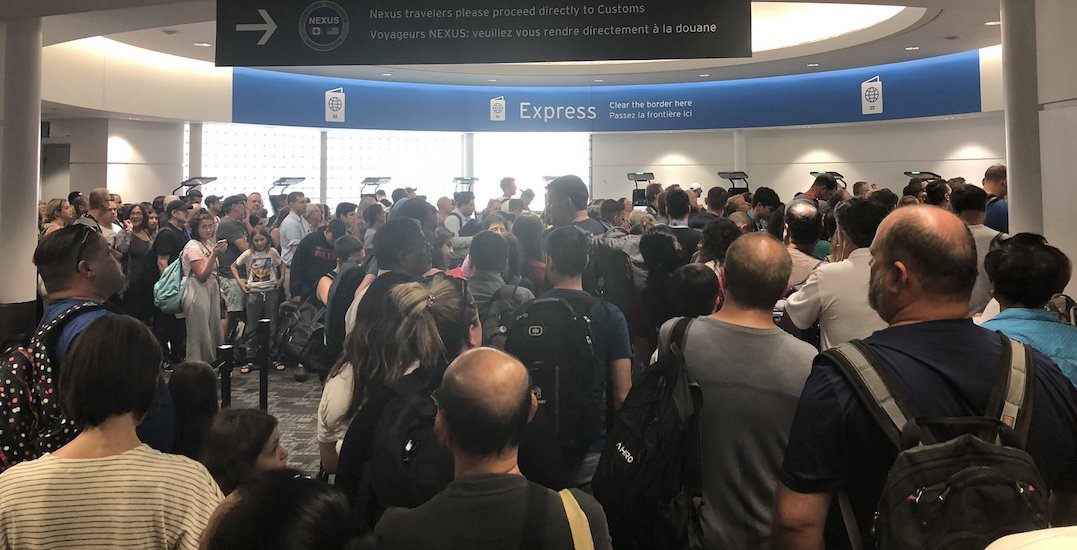 Toronto’s Pearson Airport experienced massive delays due to an IT System Outage on Sunday, July 28.

The outage affected customs kiosks throughout the airport, which resulted in long wait-times for international travellers.

Many took to Twitter to vent their frustrations about how the situation was handled, writing that they were unable to eat, drink water or access washrooms for the multi-hour duration of the delay.

Toronto Pearson first took to Twitter to announce the outage around 4 pm on Sunday, and the account posted one update to the situation around 6:45 pm before announcing that it was resolved around 9 pm.

Here’s a look at the response from those who were stuck in the delays.

Someone needs to control this chaos !!

@TorontoPearson #fail!! We got off our flight over an hour ago and there is no communication. They just blame @CanBorder and don’t send anybody out to explain. Children and elderly people are in bad shape and people are getting extremely restless. No accountability. pic.twitter.com/5igcIIs84O

Waiting to get through at terminal 3 and it is absolute chaos. There is no staff to control the crowds. Thousands of people waiting and no organization at all. Where are the staff??? We have been waiting and others who are just deplaning are cutting in front of us.

Flight landed from NYC an hour ago, still on the plane because zero capacity in the airport. Pilot says no updates being given. Surely there’s a way to expedite or mitigate the chaos. Can we not utilize terminal 1 for the backlog? pic.twitter.com/3G6F5qd5jg

Continued chaos inside. Not even in the customs area yet. Unbelievable that there are zero announcements or updates. Thanks to twitter for fellow updates. I feel bad for those with short connections pic.twitter.com/YOTGdDAVPE

It’s still a million degrees in here. With no food and water pple are going to start fainting. Maintenance needs a light a fire under it

2nd chaotic line. Have been waiting for an hour. No one providing updates?!?! At least communicate. pic.twitter.com/mRovuydl0z

Friends arriving on flight from Rome at 5:30. Stuck in halls. No one telling them what’s going on. Not able to get water or use washrooms. This is inhumane treatment. Do better.

Why isn’t there more staff helping?? The outage has been going on for several hours now, why would you not staff up immediately knowing that this would cause major delays and problems for travellers. Do better.

Line for #CBSA / Canada Customs started on the plane. Seems like IT systems are down. We aren’t even I. The Customs Hall @TorontoPearson. pic.twitter.com/3JB5wtwoHh

Your crisis management needs a lot of work. There is no information, no one directing the lines, people are getting angry. It’s a shit show

Agree! Stuck on the runway for an hour after a 90 min delay – come on guys – get some IT who know what they’re doing

People need water for medication . You should be ashamed . No communication just massive lines.

Any Staff here to help??? Passengera dont speak English and dont know what to do. Help us !!!