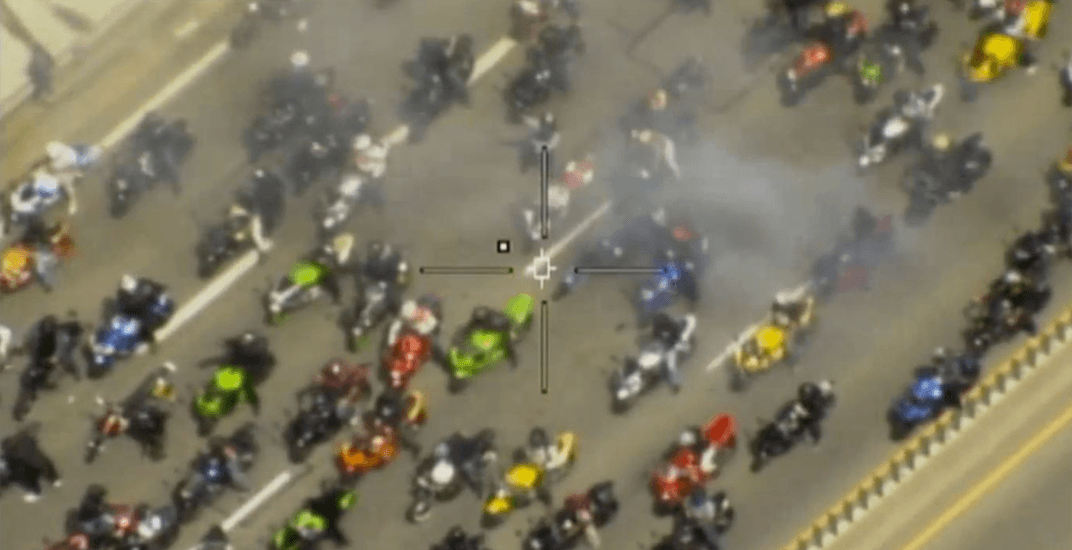 Ontario Provincial Police are looking for the public’s help in identifying members of a motorcycle mob that caused chaos on several highways in the GTA over the weekend.

Sgt. Kerry Schmidt said the mob, which comprised dozens of riders, drove dangerously, aggressively, and even came to dead stops in the middle of the highway.

They’re said to have performed stunts, smoked their tires, and popped wheelies onhighways 409, 401, 403, the Queen Elizabeth Way, the Don Valley Parkway and the Gardiner Expressway this past Sunday.

Surveillance aircraft were able to record some of the outlaws in action:

OPP appealing for witnesses in motorcycle mob activities over the weekend
Call 416-317-8250 or Crime Stoppers 1-800-222-TIPS with info pic.twitter.com/Y9PxokGqKu

OPP appealing for witnesses in motorcycle mob activities over the weekend
Call 416-317-8250 or Crime Stoppers 1-800-222-TIPS with info pic.twitter.com/dTS7zx1T9t

“The actions of these riders jeopardized the safety of all road users by increasing the risk of collisions, as well as frustrating drivers which may lead to road rage incidents,” police said in a release yesterday.

“There is no tolerance for that,” said Schmidt, who posted a video urging the public to help police identify the culprits.

OPP looking to identify riders of an organized motorcycle mob from August 6 ’17 throughout the Greater Toronto Area. https://t.co/mSkKYZ3n2J

Video evidence is shoddy at best, and with the case now four days old, finding those responsible could prove a difficult task.

Online responses to Schmidt’s plea ranged from reasonable to unhinged.

One Twitter user suggested the “throwing the book,” while another called for an all-out ban on motorcycles.

And there was plenty of less pragmatic feedback, mostly along the lines of, “Where were the cops?”

Schmidt says police will relentlessly pursue and investigate the motorcyclists, and even addressed them directly in his video.

“If you are one of those riders thinking this was a funny activity…I want you to know that by being a part of this group, you are a party to the offence. This is your opportunity to come forward, come clean, and speak to a lawyer.”

“There is no place for groups like this to highjack our highways.”

The public is encouraged to report any information anonymously though Crime Stoppers (1-800-222-TIPS).