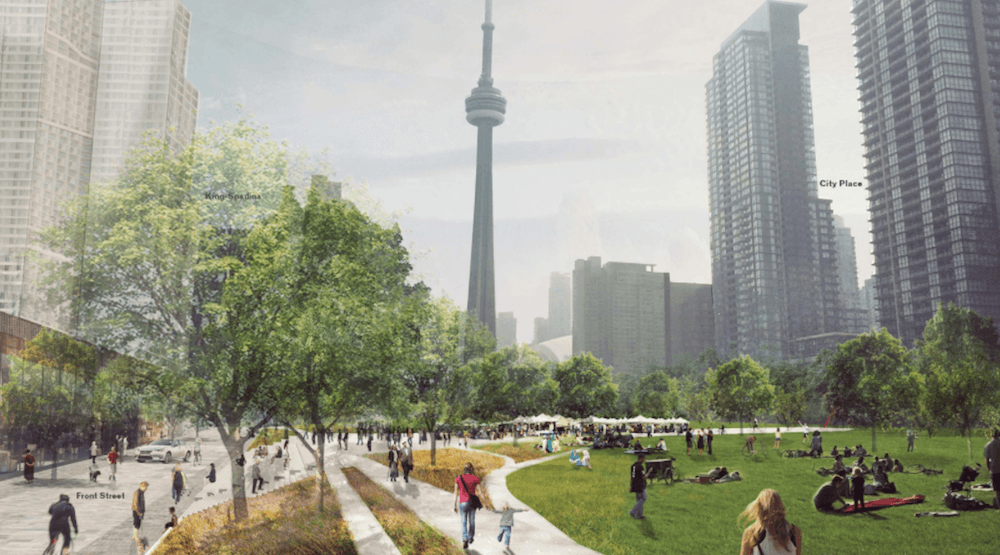 Last summer, the City of Toronto announced the development of its new Rail Deck Park downtown.

And on Tuesday, Mayor John Tory presented the next steps in development of the massive park.

Working with an international panel, Tory brought together representatives of major urban parks from around the world.

“Rail Deck Park will create an ambitious new public space for the people of Toronto and our visitors,” said Mayor John Tory in a statement. “It is important to look to other cities where such visions have been brought to fruition through hard work and unique partnerships and where they have resulted in meaningful and important new public space.”

City has launched new website https://t.co/wIMGe1XDC2 for you to learn more about this bold & exciting city building project. #RailDeckPark pic.twitter.com/dLK0y8WEvo

City staff are working on an implementation strategy for the 8.5-hectare (21-acre) park in downtown Toronto. The park would be built over the rail corridor between Bathurst Street and Blue Jays Way. The project has the opportunity to transform this unused airspace into an iconic green space for recreation, culture and celebration, according to the City.

“There is a significant park deficiency in the downtown, where 75% of parks are less than half a hectare, and where we are seeing a significant amount of growth. In order to ensure we are creating complete communities, we need to respond to the park deficiency that exists today,” said Jennifer Keesmaat, Chief Planner for the City of Toronto. “The rail corridor is the last opportunity to secure 21 acres of contiguous space. This is a once in a generation opportunity.”

Downtown Toronto is currently home to approximately 250,000 residents, according to the City. By 2041, the resident population is projected to nearly double to 475,000.

Toronto is growing fast & we need to match that growth with green space that creates better & healthier communities. #RailDeckPark pic.twitter.com/w4RvabYWcH

An update report on work to date on the planning framework will be presented to the June 13 meeting of the Toronto and East York Community Council.

A public meeting to discuss the City’s planning framework will also be held in June.