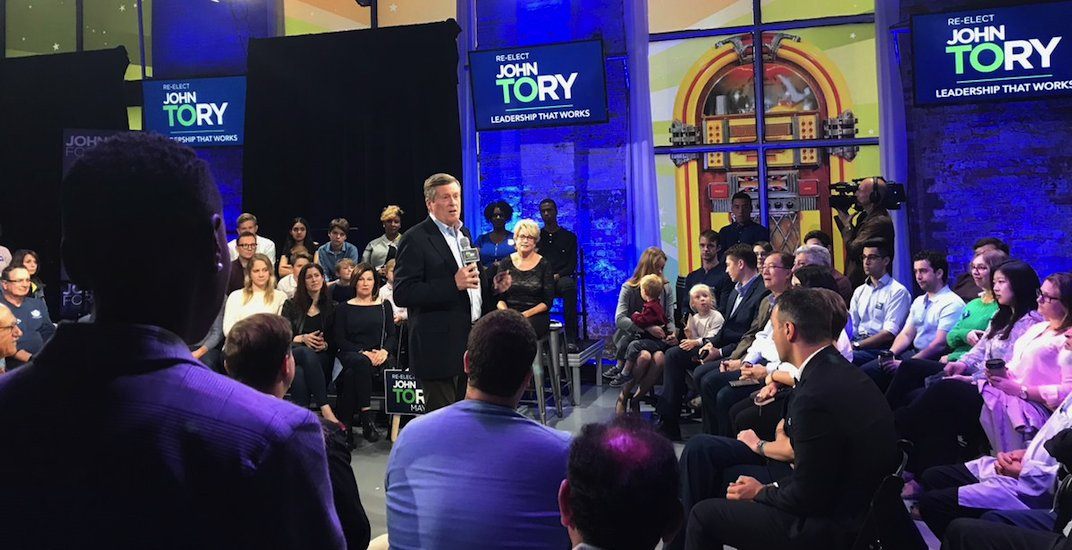 With the upcoming municipal election just over 40 days away, Mayor John Tory has officially kicked off his re-election campaign.

At a packed television studio in Liberty Village on Sunday, Tory was greeted by supporters chanting his name and cheering as he arrived, setting the stage for an inspiring town hall-style meeting that highlighted Tory’s achievements as mayor over the past four years and what he plans to do for his next term if re-elected.

Tory began by touching on the recent plague of gun violence, saying we need to do more because no one should ever feel unsafe anywhere in the city.

“We will have hired by the end of this year, many more police officers,” he told the audience. “In fact, a total of 200 by the end of the year, with 200 more to come in 2019. We’ve made an urgent plea to the federal government to ban the sale and possession of handguns in the city of Toronto and to enact tougher sentencing and bail requirements.”

Tory told supporters that being mayor isn’t just about making speeches, it’s about making progress. “It’s about standing up for the people of Toronto and working together to get things done.”

Four years ago, I was elected because you wanted me to get on with the job of building transit, keeping taxes low & to work with everyone. You wanted a leader who would work hard to make your lives better. And though there remains much to be done, we’ve made that happen. pic.twitter.com/LW9hZBhZO9

In his speech, Tory mentioned his plans for a minimum of 40,000 affordable housing units over the next 12 years, something he says that can be achieved because he received that number from city officials and confirmed it with people in the industry.

Among other things, Tory also promised to create more public transit, improved city services, including making it easier to sign up for recreation programs and to reduce youth unemployment “by half” through community programs in crime-ridden areas and connecting youth to the local tech sector.

Tory added that if re-elected, 2020 would become the year of public art, in partnership with local artists and the private sector, there will be new innovative public art projects in neighbourhoods throughout the city.

For a few hours, the election looked like it would go ahead next month with the same amount of councillors as this term.

“You can’t change the rules in the middle of a game. That’s not fair to anyone, and this isn’t a game,” said Tory in a press conference.

Ford then announced that he will invoke the Constitution’s notwithstanding clause to override today’s court decision on Toronto City Council.