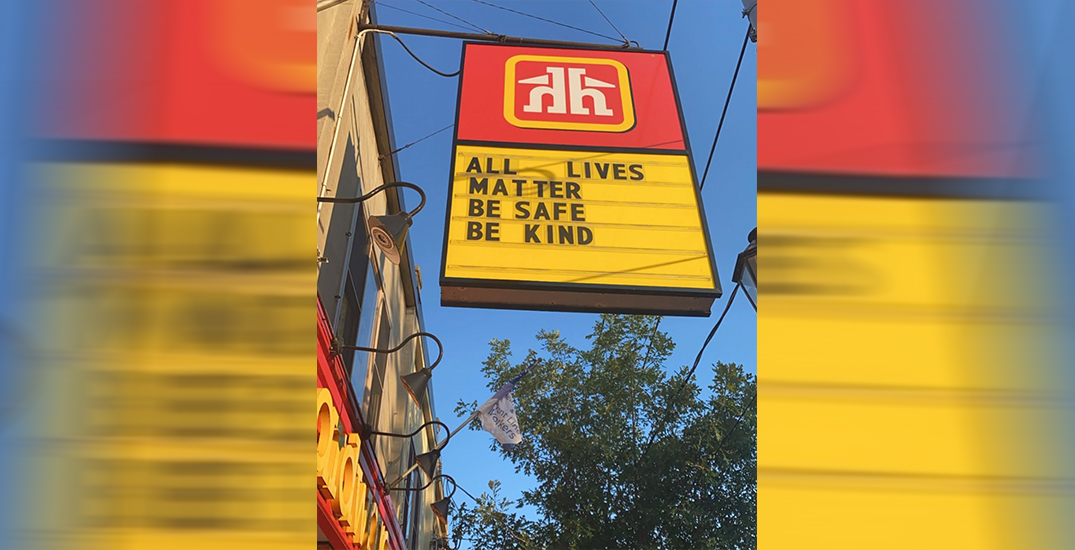 A Toronto Home Hardware has issued an apology after hanging a sign that read “All Lives Matter” at their Roncesvalles Avenue location.

A photo posted by an Instagram user shows the sign, which also reads “Be kind” and “Be safe,” at Pollocks Home Hardware.

“I actually can’t believe I saw this,” said the poster of the photo on Instagram. “How has this not been addressed?”

Others spoke out in the comments of the post expressing their concern over the signage and tagged the company.

“This sign is extremely inappropriate towards Black community members that are fighting against their people being killed and brutalized,” said another Instagram user after tagging the company.

The message written on the sign is often used as a rebuttal to the Black Lives Matter movement that has been protesting anti-Black racism in Toronto and around the world following the death of George Floyd.

The owner of the Home Hardware, Len McAuley, has since written an apology on the store’s website.

“I, Len McAuley, am truly sorry for any hurt I have caused. I am now taking a pause to recognize the impact of my mistake,” he said. “This was done in ignorance, not in malice. I take full responsibility for my mistake, and am actively striving to do better by listening and learning.”

The store’s Instagram account also included a copy of the apology and a photo showing that the previous signage had been removed.

A post shared by Pollocks Home Hardware (@pollockshomehardware) on Jul 7, 2020 at 8:11pm PDT