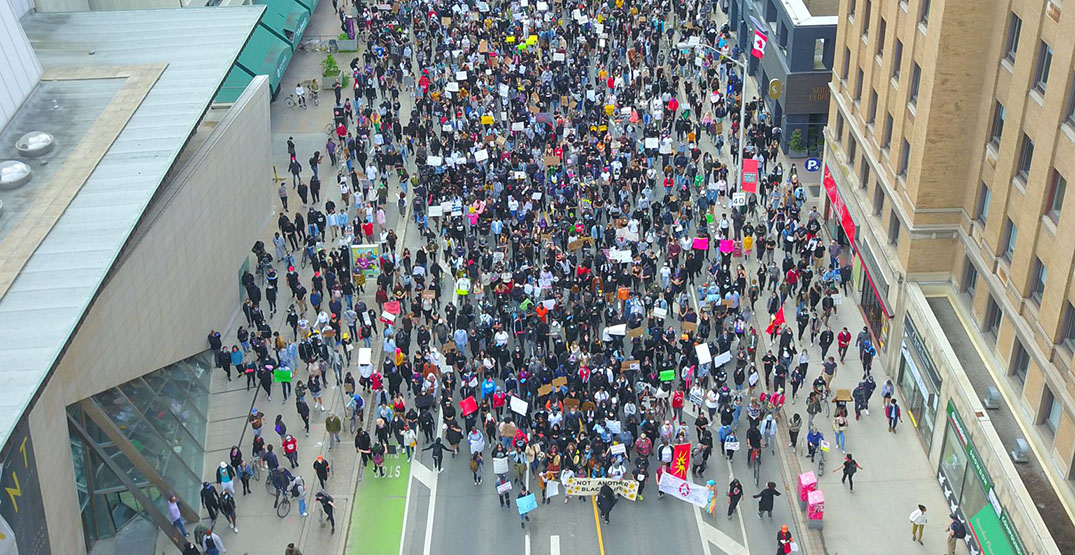 Please note: As recommended by Ontario’s provincial health officials, if you choose to attend public demonstrations, please adhere to COVID-19 health and safety measures, including proper physical distancing and wearing a mask.

A protest is scheduled to take place through downtown Toronto today to honour Black lives that have been lost at the hands of police.

According to the organizers of #MarchForChange, the march will begin at 12:30 pm at the Bloor-Yonge subway station and make its way south to City Hall. Similar protests will be taking place across the country, including in Vancouver and Ottawa on Parliament Hill.

A post shared by TheMarchForChange (@themarchforchange) on Jun 4, 2020 at 9:07am PDT

Organizers of today’s march are urging participants to follow strict safety measures, including staying six-feet apart, wearing a mask, and memorizing at least one emergency contact.

The province of Ontario is currently under a state of emergency due to the COVID-19 pandemic, an emergency that Premier Doug Ford recently extended until June 30.

“We are aware of various social media posts regarding protest activity in the city. We continue to monitor and will respond, if necessary, to ensure the safety of everyone involved,” Toronto police told Daily Hive. “We continue to monitor the situation and will be present to help ensure a safe protest for everyone attending or in the area.”

The Toronto chapter of Black Lives Matter has said that they are not involved in today’s march or any other demonstration planned this weekend.

Warnings of riots and cancelled marches have also circulated online, prompting business owners to board up their storefronts.

ATTN TORONTO: BLM PROTEST ON JUNE 6th HAS BEEN CANCELLED.

“We know of a march starting at 12:30 today from Bloor going down Yonge,” said Mark Garner, COO of Toronto’s downtown BIA. “The issue is… there are other organizations infiltrating based on this protest being scheduled that don’t have the same goals and purpose.”

Garner told Daily Hive that a source told them that “there are potential challenges and risks” connected to today’s march. “There’s a lot of misinformation going around on social media. Like the organizers have said, please don’t come if you won’t be peaceful. That is not what they want.”

The demonstrations follow days of protests in the United States, many that turned violent, and a protest that took place last week in Toronto after the death of Regis Korchinski-Paquet, a Toronto woman who fell to her death while police responded to a call at her apartment.