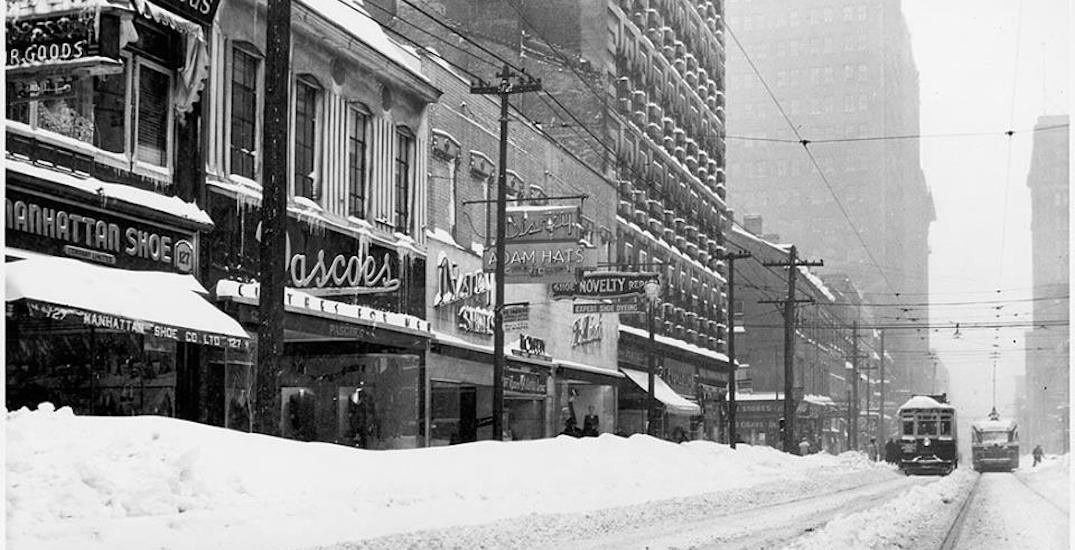 While Toronto woke up to a weather warning from Environment Canada on the morning on December 11, many didn’t know that this day marks a special historical significance.

Today, the weather statement expects the city to see 5 to 10 cm, with poor winter driving conditions likely throughout the afternoon.

According to the Toronto Railway Museum, the worst snowstorm ever to hit Toronto began on the early of December 11 that year.

By the next day, 20.5″ (or 52 cm) of snow had fallen, paralyzing the city for days. Twenty-one people died as a result of the record storm, 13 of the deaths came as a result of heart attacks caused by overexertion as people shoveled snow to dig themselves out of their homes, according to History.

“A streetcar on Queen Street was knocked over by the wind and snow, trapping 170 people and killing one person,” states History’s website. “All traffic and businesses in the city were shut down.”

So while we are expecting our first snowfall this season, it is not nearly as horrifying as 1944.

Dec 11, 1944: the worst snowstorm ever to hit Toronto begins early in the evening. By the next day, 20.5″ (52 cm) of snow had fallen, paralyzing the city for days. Fourteen people died as a direct result of the storm. 1/3 pic.twitter.com/kddqMiYUEl

One TTC passenger died on an overturned Beach Tripper streetcar at Queen and Mutual Streets, an accident that also injured 43 others. The storm also disrupted intercity passenger train service, although not to the same extent as it affected roads and transit. 2/3

Trains arriving at @unionstationTO were late as the Toronto Terminals Railway was unable to clear the track switches of snow. The CNR’s mighty 4100-series Santa Fe 2-10-2 steam locomotives had to be pressed into snow plow service. 3/3