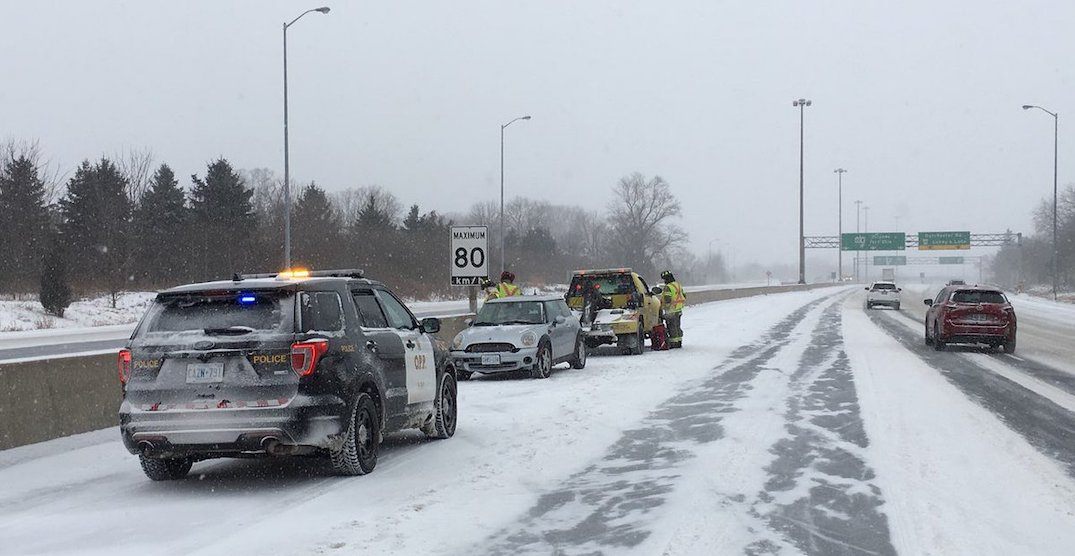 There were over 350 crashes across the GTA in a 24-hour period on the weekend.

The snow fall on Saturday mixed with the frigid weather created chaos on the roads, with dozens more sent to collision reporting centres, according to the OPP.

OPP Sgt. Kerry Schmidt said that many sections of the highways and ramps had snow and slush, which made driving tricky.

Well over 150 crashes in the #GTA due to poor driving in the winter weather today.

You stopping distances will be increased on snow covered roads… #SeeSnowGoSlow #SlowDown and #BeSafe pic.twitter.com/2JWTk4rZ0W

Environment Canada had issued Special Weather Statement for Toronto ahead of a “major winter storm” this past weekend, and the city was also under an extreme cold warning.

For Saturday, 5 to 10 cm of snow was forecasted, and the day saw snow fall on and off.

And that was just in Toronto.

Southern Ontario also dealt with its own extreme cold issues, as well as some regions having to deal with both winter storm warnings and snow squalls.

The #OPP responded to over 350 crashes in the #GTA over the past 24 hours.
Dozens more were sent to collison reporting centers.
Many sections of highways and ramps still have snow and slush making driving tricky❄️🚘❄️#DriveSafe#SeeSnowGoSlow pic.twitter.com/nGPuHsplFH

On Monday, the TTC announced delays and buses instead of streetcars as Toronto entered its third day under an extreme cold weather warning.

Conditions are expected to improve by Tuesday when milder weather moves in.