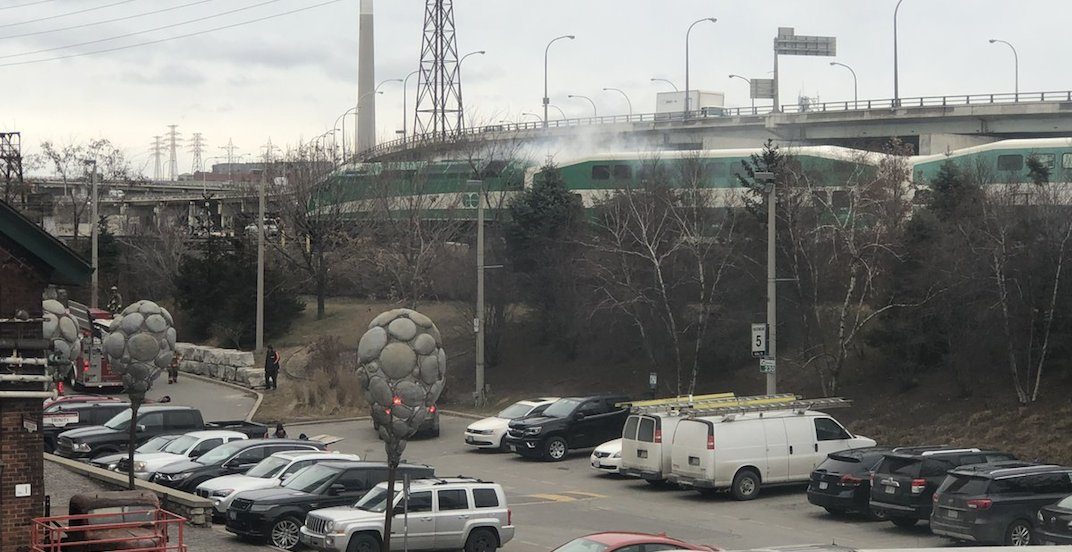 GO Train passengers were forced to evacuate during the Monday morning commute after an engine fire was discovered.

According to the transit authority, the disruption occurred on a train travelling from Oshawa to Union Station.

Transit safety officers and emergency first responders were called to the scene in the area of Case Goods Lane and Trinity Street, near the Distillery District around 10:30 am.

According to GO Transit, the train was stopped following reports of “smoke or steam” coming from the locomotive. Passengers were moved to coaches west of the accessibility coach.

The Oshawa GO 09:23 – Union Station 10:26 #GOtrain is holding east of Union Station because of a report of smoke or steam coming from the locomotive. Passengers are being moved to coaches west of the accessibility coach.

From photos shared on social media, you can see plumes of smoke coming from the GO Train in addition to several fire trucks on the scene.

Several trucks and ambulances still on scene. Here’s what it looks like.. pic.twitter.com/WkVapxfOBt

One Twitter user said an “electrical stink” filled the air.

GO Train on fire near Distillery. Electrical stink in the air. pic.twitter.com/pSJswSTYMD

Metrolinx spokesperson Anne Marie Aikins said service is gradually resuming and there are no impacts expected for the afternoon rush because of the service disruption.