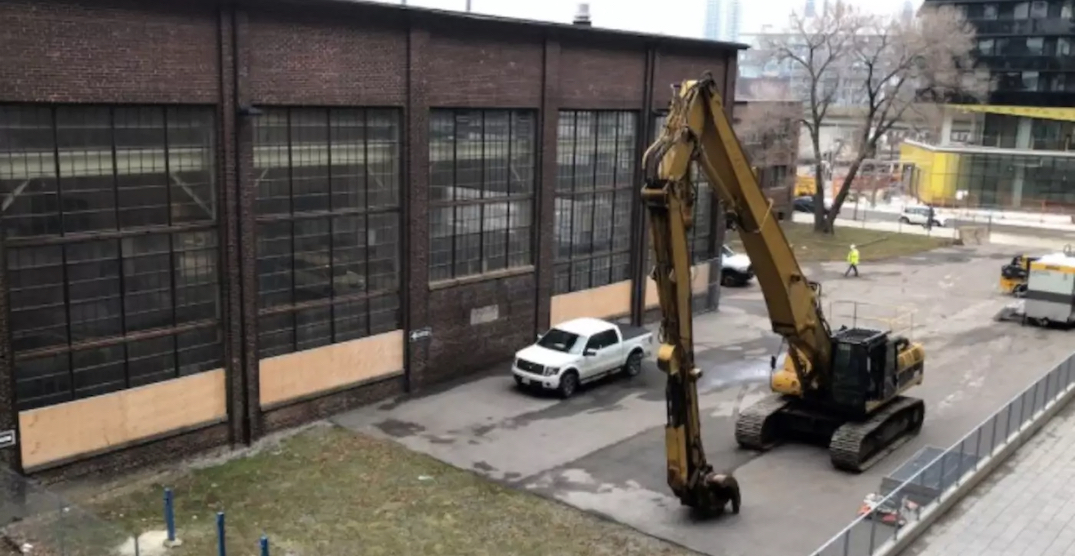 Demolition crews were spotted on the Foundry site property by residents of the neighbouring building/Photo via Canary Advocates.

Balancing Toronto’s rich cultured history with housing needs has been an unending game of seesaw. The perfect balance isn’t just a desire — it’s crucial to addressing the housing crisis.

When a demolition crew showed up at Toronto’s Foundry buildings on the first day of the latest lockdown, it brought out community advocates in droves. The historic industrial Toronto complex was set to become a cultural hub, but citing the need for housing, the Minister of Municipal Affairs and Housing, Steve Clark, issued a Ministerial Zoning Order clearing the way for development to begin and bypassing the municipal planning regulations of the site.

The Ford government’s move has been met with unending disapproval from community members and councillors alike, but it’s also a key step in resolving Toronto’s chaotic housing crisis.

The Minister of Municipal Affairs and Housing issued three MZOs in Toronto’s West Don Lands on provincially-owned properties to accelerate the creation of nearly 1,000 new affordable units and 17,000 square feet of new community space. I have always said, “We must build without erasing,” but the truth is this: Toronto is badly in need of more housing and this move will help Toronto achieve its affordable housing targets at a time when it desperately needs it.

Minister Clark’s spokesperson, Stephanie Bellotto, provided the following statement: “In regards to the Foundry, the Province has been clear that this provincially-owned property – which has been largely abandoned for over 40 years and requires demolition to allow for significant environmental remediation – will be revitalized to allow for the construction of new affordable housing, market housing, and community space, while respecting heritage elements.

We remain disappointed that the City of Toronto is slowing down the construction of much-needed affordable housing and community space, and environmental remediation in the West Don Lands.”

On Friday, an Ontario judge ruled that the province could no longer continue with the Foundry demolition pending a decision next month. This gives the City and Province time to work out its complicated situation.

At the time of the plan’s release, the City asked Ontario to provide over $6 billion in upfront capital and 300 million for on-going operational funding to help actualize the goal.

On one hand, the City wants the Province to pay up and be an active partner in achieving affordable housing in Toronto, but then impedes the process when it attempts to build. Like most things in life, you can’t have your cake and eat it too. Protecting culture is extremely important, but it’s a false dichotomy to suggest this can’t be done while building at the same time.

The fact is, the City loses affordable housing at a much faster rate than it creates it. This gridlock is not what we need right now. If the province can commit to doing more community consultation, providing hard numbers on the units they plan to build and working with the City as an equal partner, a result all sides will find satisfactory is more than possible.

Torontonians are out of work, fearful for their health, and emotionally spent due to the pandemic. Political infighting couldn’t come at a worse time. Councillors must stop adding fuel to the fire with all of the fiery rhetoric, and try to work with their Provincial counterparts to deliver a mutually agreeable outcome.

The Liberals have remained relatively quiet on the issue prompting one GTA resident to pen, “Steven Del Duca, where are you?” It’s important to note that the new and current Ontario Liberal party leader has his own checkered past when it comes to building and land protections.

In 2019, Del Duca built a large swimming pool in the backyard of his Vaughan home without securing the proper permits. His backyard is pressed against the public parkland that’s part of the Humber River watershed. It’s considered environmentally sensitive land and is controlled by the TRCA. Del Duca built anyway and created a media storm once the information became public. The gaffe was costly and gave the now Liberal leader an elitist “do as I say, and not as I do” reputation in the minds of some.

Recent data suggests Premier Ford is still polling far ahead of both Del Duca and Horwath: 44% of polling respondents stated they either approved or mostly approved of the Doug Ford government, 27 % said they had a positive view of the NDP leader, while 38% either didn’t know who Steven Del Duca was or didn’t know enough about him to form an opinion.

The message is clear: If the election were held today, Ford would still be the Premier. With no signs of a new provincial leader coming any time soon, the Ford administration is one the City of Toronto is going to have to work with for quite some time.

Let’s hope both orders of government are able to come together and deliver an outcome that is beneficial to all Torontonians.