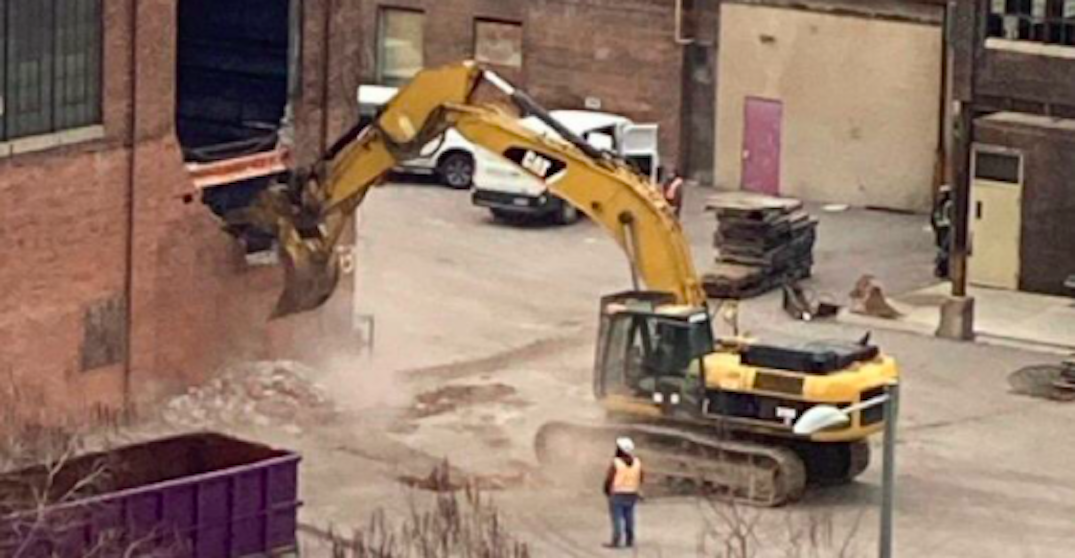 On Wednesday morning during a press briefing, Tory addressed the demolition of the Dominion Foundry Buildings in the West Don Lands, saying he supports building affordable housing quickly, but more community consultation is needed.

“I am a strong supporter of affordable housing being built as quickly as possible, and I think the efforts we’ve been undertaking as a city with Housing Now and Open Doors and working with the federal government are a good indication we have thousands in the pipeline,” he said.

“But it needs to be done with community consultation because anything you build is being done within an existing neighbourhood.”

Tory said he expressed to the housing minister that more consultation “beyond the degree of what really hasn’t happened so far” needs to be done including, seeing studies on heritage sites.

“We need to build affordable housing as quickly as possible with neighbourhood compatibility.”

The mayor also noted that the City has “limited” options to intervene as it is a Ministerial Zoning order. While he supports these laws, it is “unwise and unnecessary to use them without local consultation.”

My statement on the province’s demolition of the Dominion Foundry Buildings. (1/2) pic.twitter.com/pDiZPwJc4g

The demolition has received backlash from the community, with Toronto Councillor Kristyn Wong-Tam sending a letter with a set of recommendations to the Planning and Housing Committee and City Council that include direction to the City Solicitor to seek an injunction “to halt immediate destruction of the heritage buildings.”

“It is clear that when Doug Ford says his government is ‘for the people’ he is not referring to residents who see the opportunity to adapt and incorporate the 100+-year-old buildings on site for the future of the community, but his wealthy donors who see it as an obstacle to their bottom line,” she said in a statement.

According to Wong-Tam, the community only learned last week the demolition would take place.

Over the weekend, they sent a letter to the Ministry of Municipal Affairs and Housing and the Ministry of Infrastructure Ontario, confirming the need for a Strategic Conservation Plan and Heritage Impact Assessment with public engagement.

Demolition has begun on the Foundry buildings!!@fordnation has ignored every community voice demanding a stop to the demolition and even the letter from Toronto’s Chief Planner asking for the Province to save the heritage buildings.#onpoli pic.twitter.com/4mtijMhgzM

“The Province’s Standards and Guidelines for Conservation of Provincial Heritage Properties (2010) outline this mandatory process for provincial heritage properties. To this moment, no physical evidence of these documents has been provided to the City to allow for an adequate peer review,” she said.

The spokesperson for Ministry of Municipal Affairs and Housing said that the  provincially-owned Foundry site has been in a state of bad repair and largely abandoned for over 40 years.

“The government has determined that the site would be best used to provide affordable housing and new community space, alongside heritage elements,” Stephanie Bellotto said in a statement.

“A Heritage Impact Assessment was conducted on the site which determined that it is not of provincial significance. The Assessment considered possible alternatives to demolition and concluded that these were not feasible due in part to the contamination of the property, requiring full remediation.”

So far, over 13,800 people have signed a petition to stop the demolition.