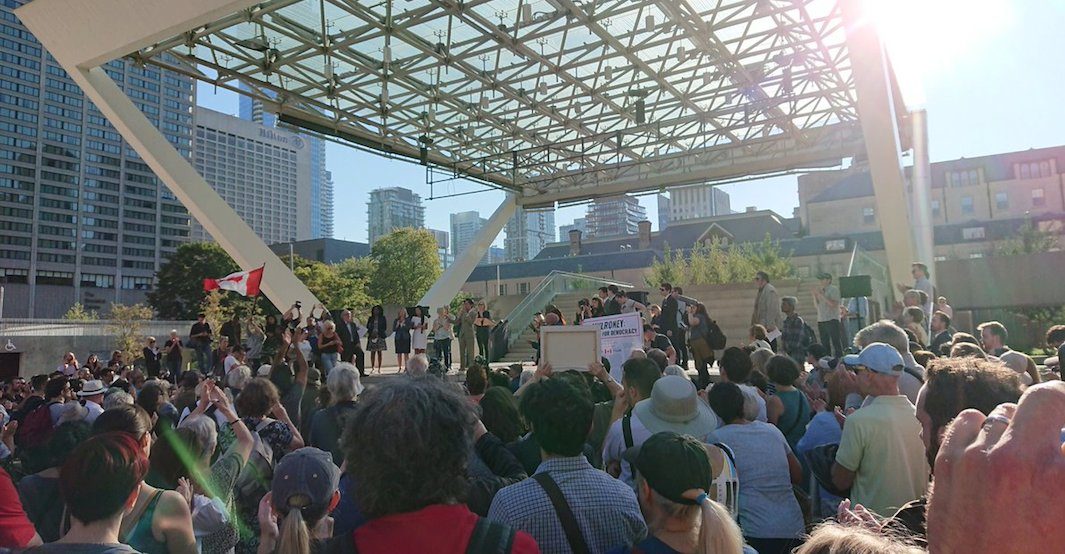 Wednesday was a rather unusual day at Queen’s Park.

Not only were numerous protestors seated in the public gallery escorted out in handcuffs, the Ontario Government also officially reintroduced the bill slashing Toronto city council nearly in half, which led to every single NDP MPP in Legislature to be kicked out for pounding on their desks to protest Doug Ford.

Tension continued to build in the afternoon when hundreds of demonstrators headed to Toronto City Hall toting signs with messages like “Democracy not dictatorship!” and “Our city! We decide!” to continue protesting Ford’s efforts to revive the bill.

#Toronto councillors.speak out against the actions of Doug Ford at City Hall #JN8104 pic.twitter.com/eJAMlNvtkY

Stopped by city hall last night to support Toronto politicians trying to save us from #fordnation. Definitely time to talk secession. pic.twitter.com/6PUvFnKQTK

From 4 pm to 6 pm, protestors cheered and chanted alongside a lineup of City Councillors, including Kristyn Wong-Tam, and mayoral candidate Jennifer Keesmaat.

We have a message for Doug Ford. This is our city, we will not let you steal our democracy without a fight. I love Toronto and it is worth fighting for. #Topoli #OurCityHall #TorCen pic.twitter.com/PlIThv47Ap

Keynote speaker and mayoral candidate @jen_keesmaat greeted by a cheering crowd: “It is time for leadership in the face of this chaos and say ‘our democracy matters.’” pic.twitter.com/TkggQdRkgL

Demonstrators even called on Attorney General Caroline Mulroney to “Stand up for Democracy” by signing a poster of the Canadian Charter of Rights and Freedoms.

At Tor City Hall with +1000 protesting #FordNation attempt to diminish democracy, abuse the Charter and weaken Toronto. We brought the Charter of Rights and Freedoms for people sign and to send to @C_Mulroney Send your letter here: https://t.co/8JxtfSKeWu #ontpoli #canpoli pic.twitter.com/i3SsktXEzk

At City Hall hearing from residents of Toronto. They do not support using #NotwithstandingClause They want democracy and consultation. pic.twitter.com/tW96jvTEHg