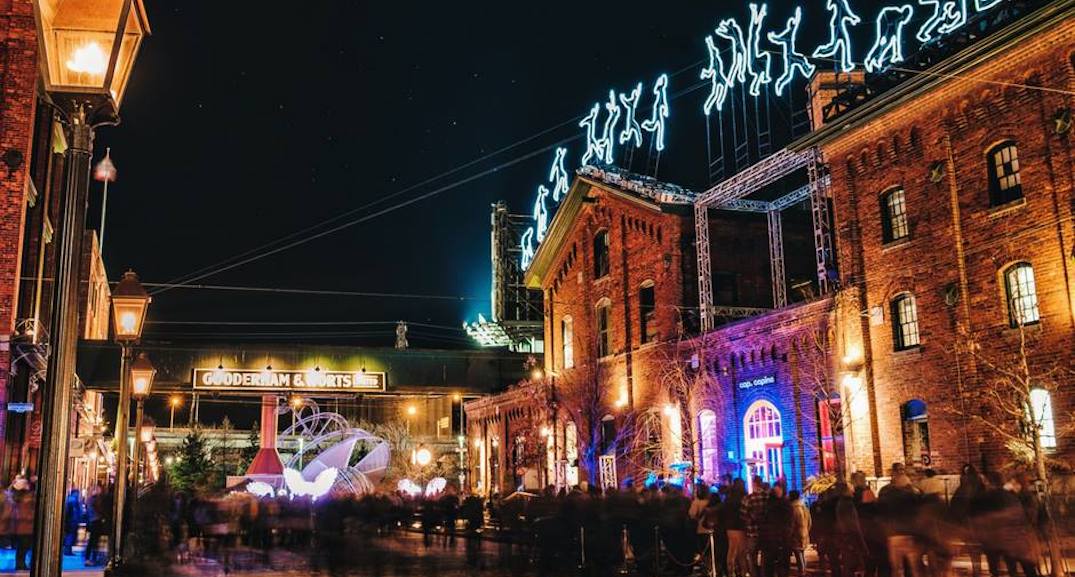 Three words Toronto:  Treat yo’ self.

It’s the weekend, you deserve it. Make some time to do something interesting, something fun, or even something hilarious. From the Toronto Light Festival to movies on the biggest screen in town, there’s plenty to do this January 17 to 19.

This is Some Louvre Shit

What: For this exhibition, Thrush Holmes steps away from the flat canvas to explore three-dimensional forms. Retaining his energetic use of colour, Holmes sprays 200 15.5” cubes with recharged fire extinguishers full of heavily pigmented paint. The resulting works will be assembled and topped with neon to create a monumental installation that marries function and aesthetics in the form of a pyramid. Visitors are invited to sit, climb on, and explore the structure.

What: Exclaim’s Class of 2020 is a huge multi-city festival and there are two nights of shows this weekend in Toronto. Friday’s got Emily Steinwall, Myles Castello, and Nutrients, Ferrari Garden all performing, while Saturday will see Luna Li, Basement Revolver, Ducks Unlimited, Spirit Josh, and Roach.

What: It’s the greatest story ever told, about the greatest life ever lived. Forrest Gump is playing on one of the biggest screens in town. Get out and see Forrest, Jenny, Lt. Dan, and of course, Mama.

What: One of the most innovative and original artists in the world, iskwē is performing in Toronto this Friday. Promoting her latest work acākosīk, the artist experiments with musical styles from electro-pop to post-rock.

What: It’s a double feature of some classically campy movies alongside a fully licenced bar. Watch as survivors of a nuclear attack are grouped together for days in the basement of their apartment building, where fear and dwindling supplies wear away at their dynamic in The Divide. If that’s not your speed watch as a doctor, scientist, organist, and biblical scholar seeks revenge on the nine doctors he considers responsible for his wife’s death.

When: January 17 to 26
Where: Venues throughout the city
Admission: Many events are free, register online

What: High Park’s Aussie Rules footy club has organized a run to raise some funds to help the Australian Red Cross: Disaster Relief and Recovery Fund. After a 5k participants will head to The Wicket for some hydration after the run where $1 from each beer sold will be donated.

What: This event is a one-stop shop for anyone looking to pursue an MBA. You’ll
be able to meet face-to-face with admissions directors from top business schools from local colleges and around the world. You’ll also be able to get advice on your applications from industry experts, network with your peers, get resume and career guidance as well as a free professional headshot for your Linkedin profile. Attendees are also eligible to apply for a pool of scholarships, worth up to $7 million USD, to help finance their MBAs.

What: The greatest disasterpiece of nine lifetimes, CATS, is at Dumpster Raccoon Cinema this weekend. Celebrate with a Jellicle Ball Singalong Screening. There will be live performers helping you hit all the high notes in the greatest collection of weirdos since the original Broadway production.

What: Why wait till Sunday for brunch? Shante or sashay over to Brazen Head on Saturday and join legendary Toronto queen Tynomi Banks for one serious extravaganza.

What: Have fun reading Shakespeare aloud. Participants can either volunteer to read or simply listen. This is the way the work was meant to be enjoyed. Copies of the play will be available and drop-ins are welcome.

What: Black Sheep Comedy is once again invading Big Rock Brewery with a whole new killer lineup of comedians. Sip a free 12oz beer or pop while laughing your butt off with headliner Jason Allen.

What: To support wildlife shelters and carers in Australia that have been affected by the devastating bushfires and extreme heat events, there will be a special series of fitness classes raising money for Wildlife Victoria. The group provides a vital link for the community between sick, injured and orphaned Australian wildlife and the appropriate response and care needed. There will be great classes as well as drinks, food, and a silent auction

What: Bring your pugs to the Dog Bowl in Trinity Bellwoods Park this Sunday for a Toronto Pug Grumble. Get ready for lots of snorting, rolling, and grumbling. It’s basically the cutest thing going on in the city this weekend.

What: Come drink drinks and listen to excellent tunes. It’s time to get weird. DJ DangerCat will be playing all the best rock & roll, indie, surf, garage, and new wave hits all night. There’s also $5 rail drinks and free pool.

What: Reduce your waste, contribute to the sharing economy, update your wardrobe, and raise funds for Newcomer Women’s Services Toronto. Just bring laundered, gently used women’s or unisex items that you no longer want in your closet. Shoes, handbags, jewelry, scarves and hats are all welcome.

What: Its 2020 so that means Quarter Centurion celebrator party is going down. Celebrate at a massive rave at the two-storey sci-fi bar that is See-Scape. There’s a stacked lineup of DJs, including Karma.Love (who is celebrating his birthday).