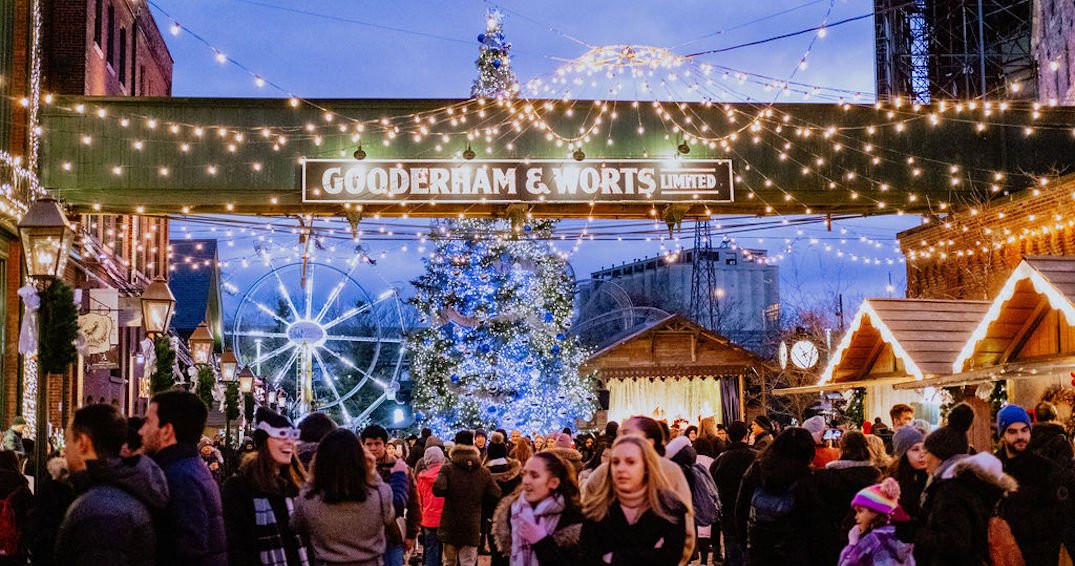 It’s cold Toronto. And no matter what the calendar says, winter is definitely here.

Embrace the season and spend your time warming your heart with plenty of holiday (and just downright cool) events going on this weekend, December 20 to 22.

What: The Christmas Market is winding down this weekend, so be sure to catch its holiday magic. Remember to get photos of The Market’s famous 50-foot tree, which will flood the space with the glow of its 40,000 lights.

Where: The Distillery District
When: Now until Sunday, December 22
Tickets: Available online

Cash Me If You Can

What: The incredible true story of a down-on-his-luck man who cashed a $100,000 phony, junk mail check as a joke, and fought the world’s biggest bank when it actually cleared. A true-life David and Goliath tale that captured the imagination of millions.

What: See an unforgettable production of The Nutcracker featuring ballerina powerhouses Anastasia Stashkevich and Vyacheslav Lopatin, principal dancers of the world-renowned Bolshoi Ballet in Moscow. With Tchaikovsky’s unforgettable score, The Nutcracker is bound to add more cheer to your Christmas.

When: Now until January 4
Time: 2 pm and 7 pm
Where: Sony Centre for the Performing Arts, 1 Front Street East
Admission: From $67 to $142, available online

What: All this Christmas cheer is probably going to make you want a cocktail. Start a new tradition by heading west to the Miracle on Ossingting pop-up. Sip on holiday-themed drinks while sitting warmly among with a huge amount of fun, kitschy holiday decorations.

What: What’s better than one winter pop-up? Two holiday winter pop-ups, that’s what. Get your Christmas spirit with a Tiki twist that’s full of music, themed drinks

What: Based off the movie, this theatrical production of A Christmas Story has all the classic hallmarks of the film, from the leg lamp to pink bunny PJ’s to a young man’s quest for an air rifle.

What: It’s a show of local odd crafts, fashion, and other accessories. Food and drinks will also be offered in this “Christmas in Halloween theme” style event. There will also be a costume contest with prizes and live entertainment.

What: Christmas movie or not, it’s the time to watch John Mclean take Gruber out. See Bruce Willis at the peak of his powers as an 80s action star. (He even had hair.)

What: It doesn’t have to be Christmas if you don’t want it to be. Shop local odd crafts, fashion, and other accessories. Food and drinks will also be offered and it’s a Christmas in Halloween theme.

What: Sample 12 different beers from a collection of different breweries. Grab a passport and enjoy good works of an all-Ontario selection of brews. It’s the place to be if you love Christmas-themed excuses to drink and the best local craft beers.

What: It’s not just time to party, it’s time to sing. Take your favourite tunes up on stage and delight and revile friends and strangers alike at this Karaoke Fiesta of both English and Spanish songs.

The Music Of “A Charlie Brown Christmas”

What: Head to the Dakoda Tavern for an all-ages rendition of the music from A Charlie Brown Christmas. It’ll be full of good feels and great options from the kitchen.

What: Ignite the darkest night of the year at this uniquely Toronto event. It’s the 30th year the celebration has taken place and is worth braving the cold.

What: Do you love the heck out of K Pop music? Get ready to see performers like KARD, VERIVERY, Zion.T, and The Rose take the stage at KPOP North 2019. KPOP North will cater to the multitude of Canadian fans of Korean culture giving them the opportunity to dive into the world of K-Beauty, K-Food, K-Culture and, of course, K-Music. K-ool!

What: Get ready to see Wannabe, a full-on, girl-powered, Spice Girl tribute band. They’re taking over the Opera House on Saturday. And if that wasn’t enough, they’re bringing True Colours, a Cindy Lauper tribute band along with them.

What: There’s a Starman living in the sky, and he’ll blow your mind at Sneaky Dee’s this weekend. Head to the spot for an increadible holiday celebration, along with Bowie hits you and more.

Divas Only – All I Want for Christmas Is You Edition

What: It’s the dance party where all they play are the divas of the past and present. Hear the hits of Mariah, Ariana, Gaga, Madonna, Britney, Beyoncé, and more. There’s even free candy at this holiday edition.

What: Withrow Park Farmers’ Market will transform Crow’s Theatre into an intimate community market. The pop-up celebrates all things local from handcrafted goods and artisanal foods to local farmers, makers, and crafters.

What: Most likely the single greatest movie to watch when you’ve had just about as much Christmas cheer as you can handle. See Billy Bob Thorton at the height of his debaucherous powers on the big screen.

What: Maybe you’ve heard that Toronto is ballin’? Well, the rumours are true. It’s time to go see the NBA Champions in action against the Dallas Mavericks. Pack the house, Toronto.

What: Listen to some electric dirges and shadowy tunes and Engel’s Solstice Show. Celebrate the passing of the year’s darkest day with some worthy music.