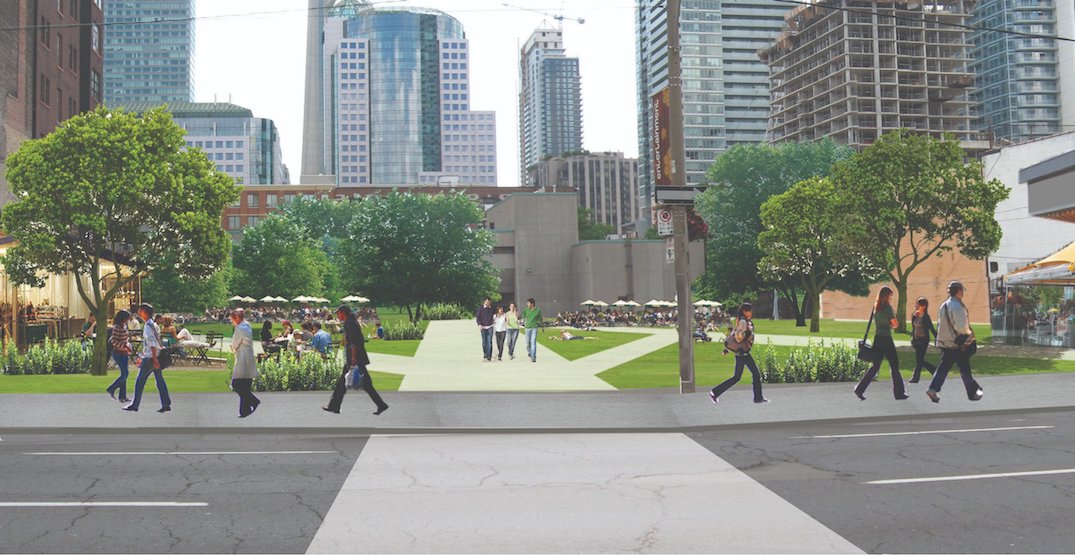 A parking lot between Adelaide and Richmond in downtown Toronto is set to become a new city park space.

The lot, located at 229 Richmond Street, is already owned by the City. This week, the CreateTO Board of Directors adopted a proposed Master Plan to redevelop it.

The City plans to build a 24,000 sq ft park with a new three-level, 144-space underground parking lot below it. According to City Councillor Joe Cressy, this will be the first new, large park in the King-Spadina area in 20 years.

“During this time, the King-Spadina community has grown from 230 residents to a projected 44,000 people, once current development is complete,” Cressy tweeted. “We clearly need more greenspace and parkland for people in our community.”

5 years ago I committed to turning a vacant parking lot into a new park for the growing downtown King-Spadina community. This morning I’m proud to join Mayor Tory, Deputy Mayor Bailão, and CreateTO to announce the next step in the revitalization of 260 Adelaide & 229 Richmond. pic.twitter.com/7AJ0A7UxnX

The property next to the parking lot — an aging fire station at 260 Adelaide Street West — will also undergo a massive redevelopment. The City plans to relocate the fire station to a new state-of-the-art facility at Metro Hall and sell the Adelaide property to a developer.

The developer will then build a new high-rise residential building on the property with 456 market-rate units, 196 affordable units, and 10,000 sq ft of community space. And in exchange for zoning exemptions, the developer will also pay for the construction of the new park.

This announcement comes just a few days after the City’s plan to build Rail Deck Park, a 21-acre downtown park above a set of rail tracks, was quashed after a provincial tribunal sided with a developer looking to build a mixed-use community on the site.

According to a City staff report, the Adelaide fire station will be relocated in 2024, but no timeline for the construction of the park has yet been given.