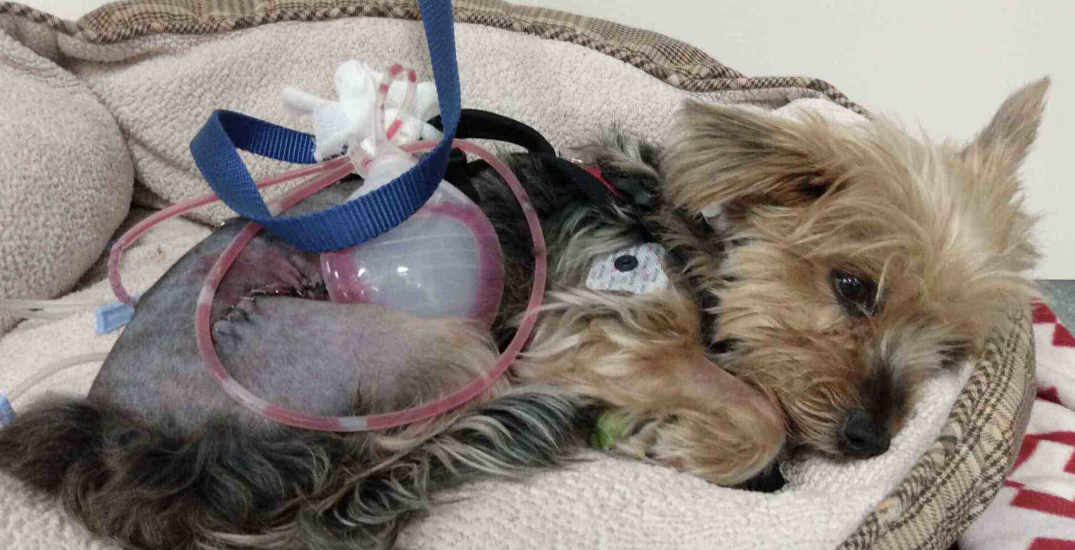 A family dog is being hailed as a hero after protecting a 10-year-old girl from a coyote attack.

Dorothy Kwan’s daughter was walking their six-year-old Yorkie, Macy, near their Scarborough home on Tuesday morning when a coyote chased them down the street.

The violent ordeal, captured on a neighbour’s security camera, shows Kwan’s daughter running and screaming for help as the coyote pursues her and Macy.

As it catches up with Macy, the little dog fights back and puts herself between the attacker and the young girl.

Even as the coyote grabs Macy in its jaws, shaking her, she continues to bark back in defence and stand her ground. The coyote eventually gives up the attack and runs off.

Warning: This video contains graphic content that some viewers may find disturbing. Viewer discretion is advised.

The heroic pup was left with “extremely serious” injuries to her spine and leg and underwent surgery at Scarborough’s Toronto Veterinary Emergency Hospital.

Macy is expected to make a full recovery, Kwan told Daily Hive, but remains in the ICU with a fever. Her daughter is “traumatized,” but talking about the attack has helped her cope.

An animal services officer told her there was “nothing they could do” and handed her an educational pamphlet, she said.

“My dog was trying to protect my daughter,” Kwan wrote on the page. “My heart is breaking for both my little one and our dog.”

She told Daily Hive that she rescued Macy five years ago. At the time, she was “extremely afraid” of people and other dogs but has since become “very protective” towards the family.

“I’m a single mom of two, and my children and our dog mean everything to me,” the GoFundMe page reads. “[Macy] you are our hero.”