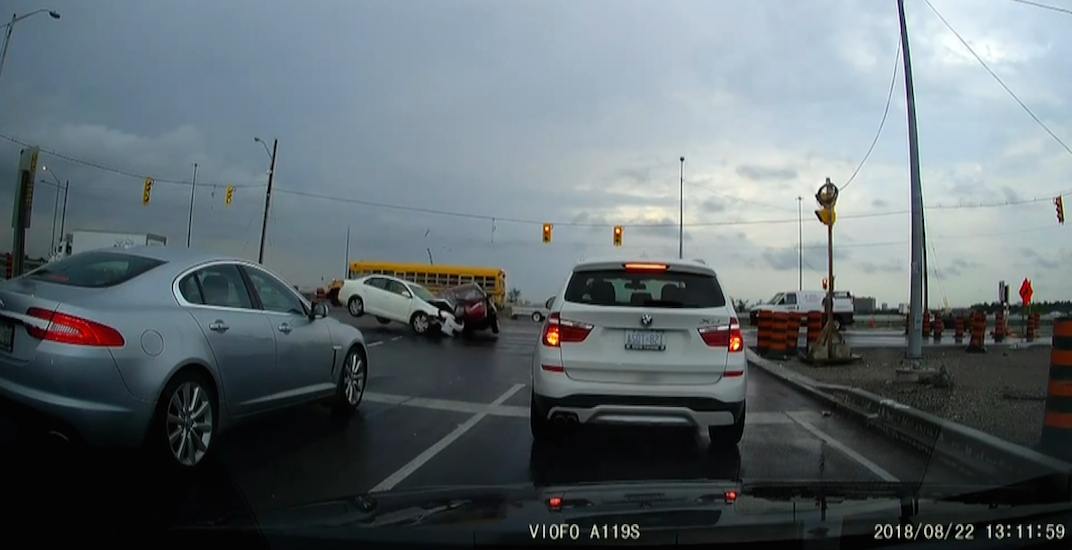 The video, which was posted on Instagram by David Ursino, shows a red vehicle collide into a white vehicle on Highway 7 near Red Maple Road just after 9 am.

The collision launched the white vehicle into the air before it landed on a right turn ramp several feet away.

WARNING: Some viewers may find the following video disturbing

Ursino, who witnessed the crash on his way to work, said he went to check on the driver in the white vehicle after the collision.

“When I got [to] the white car, it was smoking and someone said it was on fire. I was worried it was going to blow up so I decided we had to pull the guy out right away,” said Ursino in the post’s caption.

Ursino said he had to pull hard to open the driver door to get the driver who was unconscious.

“Fortunately, there were another couple of guys near me. I had to pull the guy out carefully while getting someone else to support his neck and head and someone else to grab his feet.”

After removing the driver from the vehicle, the witnesses laid the driver about 30-feet from the car, which thankfully, never erupted in flames.

Ursino waited with the driver until police and paramedics arrived and by then the driver was coherent.

“He woke up and all he was concerned about was making his last class at York University.”

COLLISION – Hwy7 W/B is currently being closed at Red Maple Road, which is East of Yonge Street. Multiple vehicles involved with reports of injuries. Updates to follow. Expect traffic delays in the area.