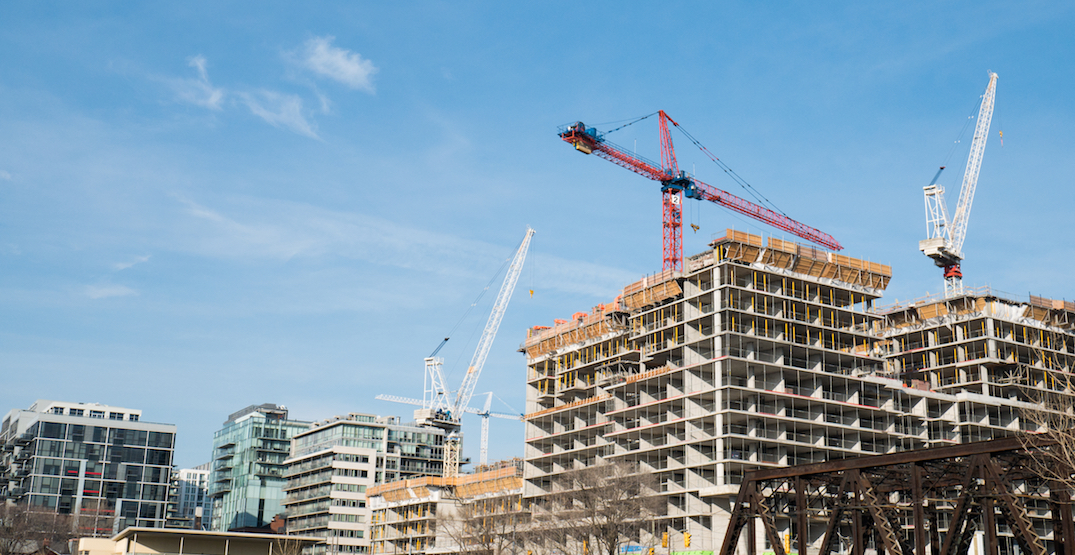 After the province’s new Stay-at-Home order regulations were announced on Friday, a list of what constitutes an essential construction project was released. It notably included the allowance of all projects that are “residential construction activities or projects and related services.”

This decision was met with pushback both from Toronto residents who have observed unsafe working conditions on condo construction sites throughout the pandemic, as well as Toronto City officials who see condo construction as non-essential. The Province, however, says this is being done to allow additional housing to be created.

“The health and safety of construction workers is a top priority for our government,” Ryan Whealy, acting press secretary for Labour Minister Monte McNaughton, said in a statement to Daily Hive. “Critical infrastructure projects such as new hospitals, roads and bridges must continue. We need those projects to maintain our fight against this virus. Residential construction that has already started will continue as families are depending on these projects to put a roof over their heads.”

Toronto City Councillor Josh Matlow, who has openly questioned the Ford government’s motivations for allowing condo construction to continue in the pandemic, says that the majority of projects being developed won’t even be accessible to the average Torontonian.

“The majority of the houses that are being developed are far more expensive than the average person will ever hope to afford,” Matlow told Daily Hive. “This is not some altruistic affordable housing project that they’re saying ‘Hey, we’ve got to get this done.’ There are luxury homes being built. That doesn’t address the affordable housing crisis.”

Matlow also pointed to the fact that condo developers have not only faced virtually no operational restrictions, but were also granted extended working hours early in the pandemic.

“There’s such a clear connection between donations that the development industry through their lobbyists have been giving to the Ford government, but this is just one of many gifts the Ford government has been giving their financial donors in the development industry throughout the pandemic,” Matlow said. “When people are understandably distracted, they’ve been helping out their friends.”

Matlow’s concerns over the continuation of Toronto condo construction are largely based in the fact that Toronto Public Health has identified construction sites as one of the leading causes of COVID-19 outbreaks, along with offices, warehouses, and shipping and distribution facilities.

Over the past year, Torontonians have taken to social media to share their frustrations with continually seeing mask-less construction workers not following COVID-19 safety protocols and likely furthering the spread of the virus.

In Toronto safety orange means you don’t have to wear a mask. Construction workers everywhere downtown being cosy and not a mask to be found. 😷

I hiked quite a lot when I was in Ontario and never saw a mask. Not one. I also saw many construction sites in Downtown Toronto with no masks. That was about 300 ppl. It took a lot of calls and emails to get it ratified. 🤦🏼‍♀️

I work in construction in toronto and I’m gonna guess mask compliance is somewhere around 20-25%. And this is indoors, in houses, with 10-15 different guys from different companies side by side https://t.co/VVPNjNrOw5

I live in Toronto, and every time I walk past a @cityoftoronto construction site no one has a mask and no one is wearing masks. Have called @311Toronto several times and nothing has been done. But once more let’s punish kids

On Thursday, the day before the new regulations were announced, the Province launched an “enhanced, targeted province-wide campaign” that is intended to ensure construction sites are following proper COVID-19 protocols.

“We’re dispatching 200+ workplace inspectors, supported by provincial offences officers, to visit 1,300 constructions sites to enforce COVID-19 safety requirements,” Whealy said. “We anticipate that they will visit more than 1,300 construction sites over the next four weeks to ensure public health measures are in place. We continue to take a hard-line approach to all workplaces that do not comply with COVID-19 safety requirements.”

According to the Ontario government’s website, violations may result in fines of up to $750 for individuals and $1,000 for businesses. Since the start of 2021, across the entire province, 500 COVID-19 related tickets have been issued and work sites have been stopped due to unsafe conditions just 26 times.

“I could point to more than 26 projects in the Yonge and Eglinton area alone, never mind the province,” Matlow said.

Anyone who does observe a concerning construction site is encouraged to contact the Province’s Health and Safety Contact Centre.

Going forward, Matlow says he would like to see a more common sense approach from the provincial government when it comes to deciding what is essential.

“I’m calling on the government to be consistent with restrictions because when they don’t make sense, they lose people, as was seen when they shut down small retail stores but opened big box stores,” Matlow said.

“No public health expert in the world would agree with that. When things aren’t based on science never mind intuitive common sense, they will lose the confidence of people and therefore people start tuning out and that’s not good when you’re asking people to follow a bunch of rules to save lives.”