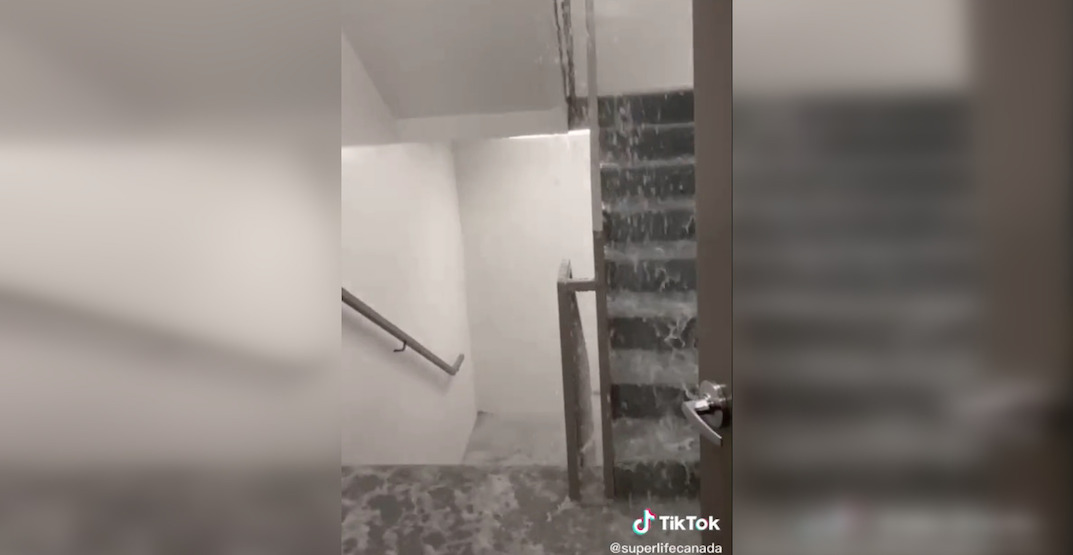 A Toronto condo building got an unintentional waterfall of its own this week after a massive flood took over the building.

A now viral TikTok was posted of the massive flood inside North York’s Emerald Park condo building showing water gushing down the stairwell, coming out of the elevator shaft, and accumulating ankle-deep on hallway carpets of the 41st floor. Another shot of the condo building’s exterior shows water dripping on the outside too.

The poster, who goes by the screen name superlifecanada, hilariously captioned the video “Toronto Condo transform into ‘Niagara Falls.'”

Some commenters compared the scene to something out of Titanic, and another wrote, “Can’t go to Niagara Falls because of the pandemic? No problem buddy we bring it over to you.”

After the TikTok made its way over to Reddit, a user there posted another video of the flood showing the building’s sixth-floor stairwell also teaming with water, so it appears the water became a building-wide issue.

The building, located near Yonge Street and Sheppard Avenue West, is managed by FirstService Resident. They did not respond to request for comment by the time of publication.

The cause of the flood, the extent of the damage, and how many residents were evacuated is currently unknown. Some Redditors, however, have speculated that the cause was a burst pipe, and one user posted that the power in the building had been shut off from the 25th to the 42nd floor, with those floors being deemed uninhabitable.

How many residents were displaced, and how long they will be out of their homes for, remains to be seen.