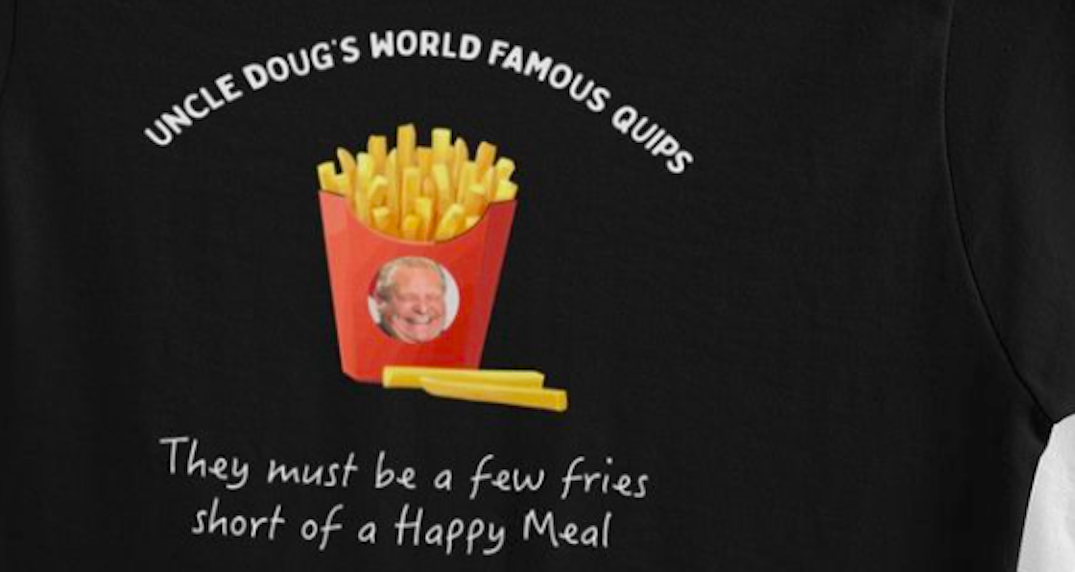 A Toronto clothing brand has just released a new line of T-shirts with Premier Doug Ford’s most infamous quotes printed on them.

The premier has been making headlines recently with some of his off-the-cuff remarks during his press conferences that he provides multiple times a week on COVID-19.

Last week he asked US President Joe Biden for help with delivering the Pfizer vaccine to Ontario, saying, “No more hunky-dory, kumbaya.” And he added, “I’d be up that guy’s yin yang so far with a firecracker” when speaking about the Pfizer CEO.

Of course, there’s also the video of him saying “stay at home” in 21 languages.

For all the quips and headline moments, the Toronto store, FridayBy6ix, has now launched a bunch of t-shirts with his sayings like: “they must be a few fries short of a happy meal”; “I will be like an 800-pound gorilla on their back”; “I think the cheese has slipped off the cracker with this guy”; and “we stay a la maison.”

The store was founded by friends, Addie and Chris, fourth year students at UofT.

People began asking where the friends made their own merch, which was a turning point for the business.

“Getting that kind of feedback from folks that aren’t your friends and family is a big deal. That really motivated us to go for it and open an official webstore in early March 2020, just at the start of the pandemic. A lot of our designs are inspired by this city and in turn, we’ve developed into a very community driven brand. The name FRIDAYBY6IX is a tribute to those vibrant Friday nights in Toronto full of life and adventure,” they both told Daily Hive.

When doing the new collection on Ford, they said his catchphrases are “hilarious.”

“I don’t think we’ve ever heard someone come up with one-liners the way he does. We started to use some of them around the house as a joke, with our favorite being the 800 pound gorilla one by far. That’s when we thought we’d try our hand at seeing if we could come up with designs for them just for fun. We both knew it would have to be a little different from our usual designs but still have that FB6 touch. We thought it would be a pretty lighthearted way to add some humour especially in these challenging times,” they added.

For the team it’s a creative representation of political satire and popular culture—at the end of the day, their goal with this project is to make people laugh and capture a trend in popular culture that’s entirely unique to Ontario.

And the responses has been “astronomical.”

Thanks to this duo, people might encounter Ford’s infamous quotes on the street of Toronto, even though you should be “restez à la maison” during the lockdown and Stay at Home orders.