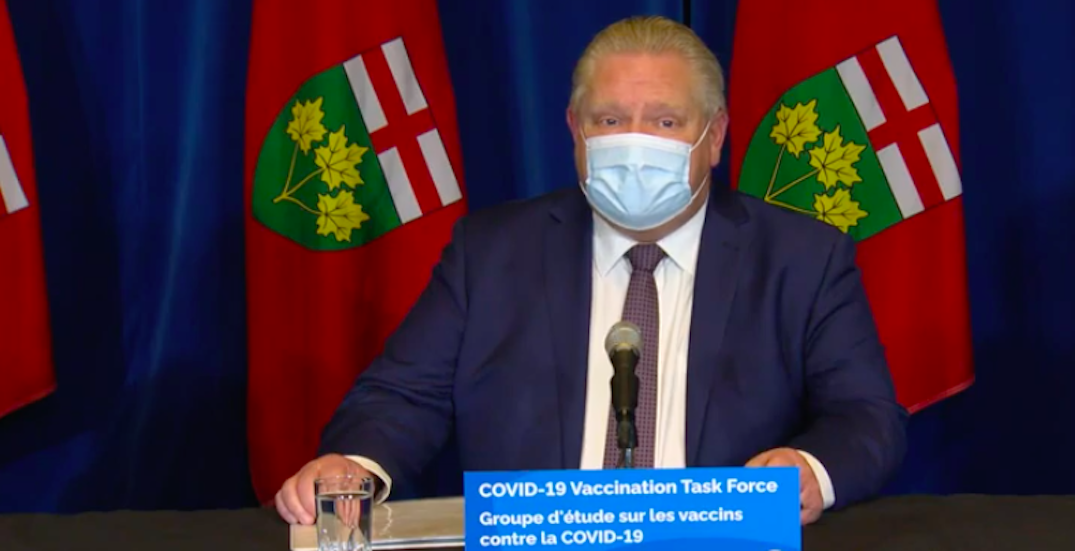 On Tuesday, Ford responded to the news that Pfizer will not be delivering their vaccine next week by saying, “It makes me very angry.”

Ford noted that there is a Pfizer manufacturing plant six hours away in Michigan, pleading with the US to help.

“American friends, help us out. We need help once again as we did with the PPE. You have a new president, no excuses. We need your support and look forward to your support. That’s a direct message to President Biden. Help out your neighbour. No more hunky dory, kumbaya. Help us out. I’m asking you for help,” he said.

In order to make up the temporary loss of shipments, Ford asked Biden for one million doses to “get us over the hump.”

While the premier emphasized he is not angry at the prime minister or deputy prime minister, he said that if he were in Justin Trudeau’s position, he’d be on the phone with Pfizer every day.

“Nothing is more important than getting these vaccines. If I was in his shoes, which I’m sure he’s doing it, I’d be on the phone every day. I’d be up that guy’s yin yang so far with a firecracker, he wouldn’t know what hit him. I would not stop until we get these vaccines,” Ford said.

He also mentioned that other countries with populations of five million are getting the vaccines before Canada, which he said is not in accordance with Canada’s importance on the world stage, being part of the G7.

“We got to be on this guy like a blanket. I’d be outside that guys house saying, ‘Where’s our vaccines? The EU is getting them, why not Canada?’ That’s my question to Pfizer. We need your support.”

The Ford government was not advised of the shipment delay until Tuesday morning. Nevertheless, there will be the full supply given in the first quarter of the year.

However, Ford did announce that all long-term care homes in COVID-19 hotspots have been vaccinated ahead of schedule, as it was supposed to be completed by January 21.