Regardless of where you live in the country, commuting is an everyday occurrence.

But in Canada’s largest city, it’s not just an everyday occurrence, it’s a way of life.

In fact, 11% of car commuters living in Toronto spend at least 60 minutes travelling to work, according to new-released data from Statistics Canada.

The results from the 2016 census show there are over 2.74 million commuters who use all modes of transportation to get to work in Toronto, and 17.2% of these people spend 60 minutes or more travelling to work.

By contrast, of these numbers, over 1.86 million people commuted by car, and 11.1% of these drivers spend over 60 minutes driving to work.

The report found that among the car commuters who had a regular place of work in the Toronto CMA, many of them came from Barrie, Oshawa and Hamilton. 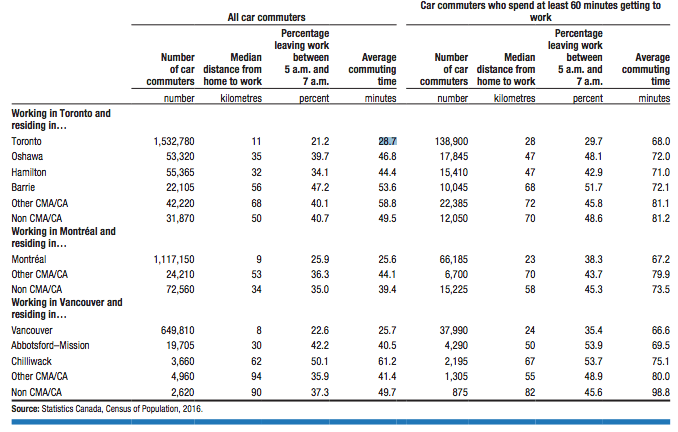 “Toronto also had a significant number of people coming from other CMAs (such as Kitchener–Cambridge– Waterloo, St. Catharines–Niagara, Brantford and Guelph) and from non-CMA/CA areas,” reads the report.

Nearly one-half of people who lived in these areas and worked in Toronto were commuters with long commute times, who reported an average commute of at least 80 minutes.

According to the report, the average commute time to work for Canadians is about 26 minutes each day which is up just one minute from 2011.

However, those living in the country’s three largest CMAs, such as Toronto, Montreal and Vancouver, often experienced longer commutes, the report noted.

Car commuters in Toronto experienced an average commute time of 34 minutes while those in Montreal and Vancouver spent about 30 minutes getting to work.