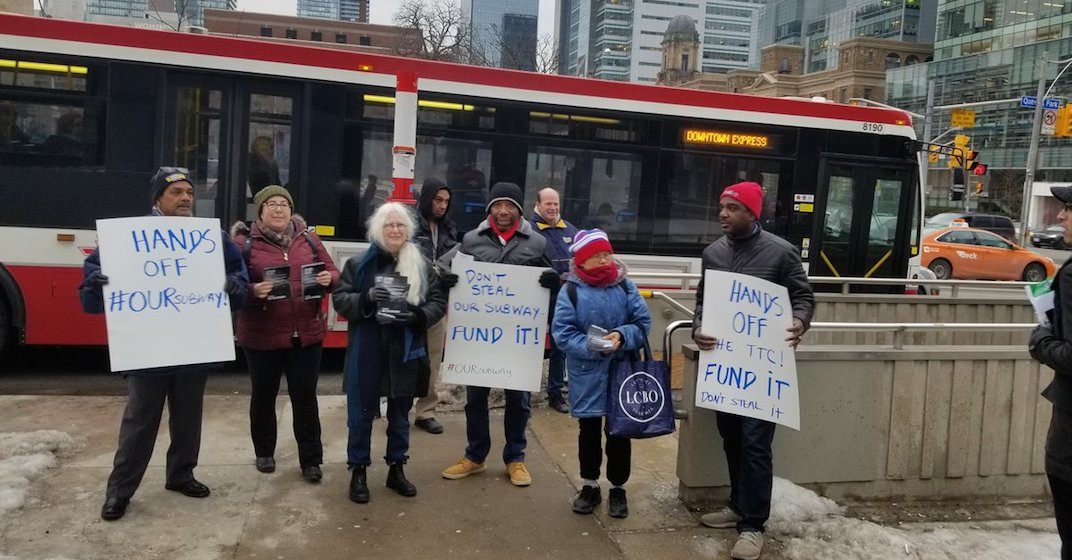 In the wake of the City of Toronto and the Ontario government agreeing to terms of reference to discuss the uploading of the TTC’s subway to the province, transit advocates, MPPS and union members protested the upload Friday morning.

The “#OURsubway Day of Action” was spearheaded by the Amalgamated Transit Union Local 113, which represents TTC workers, along with transit advocacy group TTCriders and the Toronto Labour Council, and took over 35 subway stations across this city this morning.

Call Doug Ford’s office and tell him this is #OurSubway! pic.twitter.com/YBl3LSe06w

MPPs Jessica Bell and Bhutila Karpoche, along with Councillor Joe Cressey were among those participating in this morning’s protests.

Our members are at all corners of Queen’s Park station to tell Premier Ford @FordNation: hands off #OURsubway! @ttcriders pic.twitter.com/IZxpTo4kXh

As the future of Toronto’s subway remains in limbo, TTCriders says the upload would result in higher fares and poorer service.

“Breaking apart the TTC and handing over the subway to developers and the private sector will mean higher fares and less accountability. If the province is serious about fixing overcrowding, delays, and unaffordable fares – and it should be – proper funding for the TTC is the answer,” reads a statement from TTCriders.

On Thursday, a group of prominent civic leaders and city builders released a public letter to Mayor John Tory and Toronto city council members to urge them to defend Toronto’s local subway system against an upload by the provincial government, which they believe will “weaken the city.”

“Transportation and transit planning is at the heart of what a city does, and the proposed takeover by the province is simply wrong,” said David Miller, former Mayor of Toronto.

“The subway was predominantly paid for by the residents of Toronto and TTC riders. It is a crucial local service and it must remain a unified system.”

This follows Councillor Josh Matlow calling on city council to implement a public awareness campaign titled “Save Our Subway” that opposes the subway upload in the face of the province’s planned takeover.

The public information campaign would include ads and public announcements in TTC stations and on transit vehicles.

Instead, “his politics-based plan is to sell off our subway lands and air rights while wasting billions of dollars on subways to Pickering, where enhancing existing GO lines would move suburban residents much faster.”

Matlow says what Ford should be doing is helping Toronto invest in fact-based transit plans, such as the Relief Subway Line and the light rapid transit network in Scarborough.

Meanwhile, a new report from the City of Toronto’s auditor general revealed fare evasion rates were much higher than the TTC has previously stated, and cost the transit agency at least $61 million last year.

According to the report released on Thursday, this amount does not include at least a further $3.4 million in lost revenue from Metrolinx’s malfunctioning Presto fare gates and card readers.

Altogether this pushes the TTC’s total 2018 fare revenue losses to an estimated “probably understated” $64 million, which is a relatively significant amount considering 95% of the transit system’s revenues are from passenger fares.