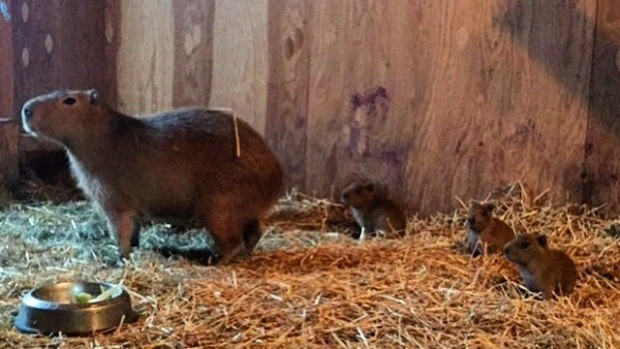 First, a little background: The capybara parents cemented their status within Toronto celebrity animal circles – which also include the Ikea Monkey and Toronto Zoo panda cubs – last spring when they escaped the High Park Zoo for several weeks. They’ve since been nicknamed “Bonnie and Clyde” for their outlaw behaviour.

What a difference a year can make, for it appears as though the former fugitives have settled down. We’re happy to report that their babies have entered the world “healthy and doing well.”

“The couple credits their long time apart this summer wandering the wilderness of Toronto’s High Park for the kindling of their passion, and now they have three adorable pups to show for it,” reads an official birth announcement, which was tweeted by Toronto mayor John Tory.

Oh, and in case you’re wondering: yes, there is baby registry.

The Toronto Parks and Trees Foundation is currently collecting donations to provide opportunities for Torontonians and visitors to interact with animals like the capybara and support the ongoing funding of High Park Zoo, among other charitable endeavours. (Donations of $10 or more are eligible for a tax receipt, which is more than the TTC can say).

Happy spring Toronto! You may have heard, but our family is a little big bigger now… And don’t worry, they’ll be kept safe and sound.