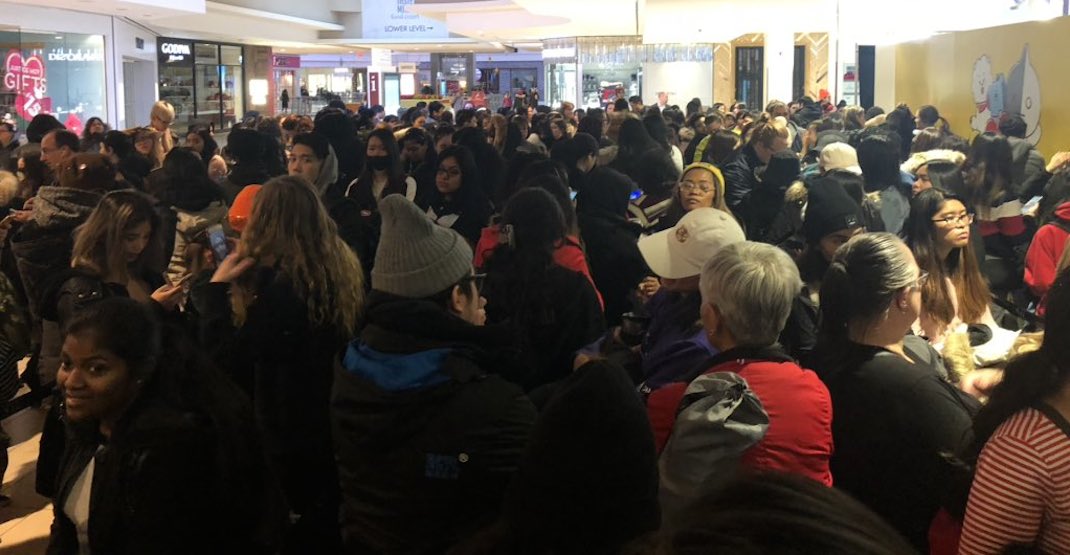 Update: The BT21 pop-up has confirmed it will reopen on December 8 and 9, full story can be found here.

The pop-up, which was for BT21 — a popular collaboration between K-pop superstars BTS and LINE FRIENDS, kicked off last Friday, November 30 at Scarborough Town Centre and was intended to stay open until December 7.

Following a crazy opening day, which saw BT21 lovers lined up for hours in lines that stretched and weaved through the mall, the pop-up abruptly shut down after only two days of being open.

For days fans were left with little to no explanation of why the pop-up shop closed, but by Thursday evening, Universal Music finally gave fans the answers they had been waiting for.

“The response the first Canadian LINE FRIENDS BT21 pop-up store has received has been incredible, but we can only stay open while supplies last,” reads a statement from the music label.

“Due to the overwhelming support and enthusiasm that customers have shown, we are working to restock product as soon as possible so we can re-open and serve customers as best we can.”

Fans were initially told the pop-up would re-open this weekend, but it turns out, that won’t be happening and a re-opening date has yet to be confirmed.

THANK YOU for supporting @BT21_’s first ever pop-up shop in #Toronto!

Due to overwhelming support we will be closing the shop but we will open again next weekend with MORE CUSHIONS. Make sure to come by!#BT21 #BT21Toronto pic.twitter.com/ERyETcYP8G

“We look forward to once again welcoming customers to shop their favourite BT21 characters created in collaboration with LINE FRIENDS and BTS. We are currently working to finalize dates and timing, and will share an update with you as soon as we have confirmed details,” reads the statement.

“We’re working to get all your favourite BT21 characters to Canada from across the globe as quickly as possible for you. We hope you are able to check out the pop-up store soon.”

While the pop-up is still set to re-open at a later date, it didn’t stop fans from sharing their disappointment on social media:

Doesn’t explain anything tbh there’s only a couple days before the weekend and some of us need to plan our schedules like…now pic.twitter.com/0C6fCRhju5

I’m not going to STC at 6am again and spending another 6 1/2 hours in line only to not get the 1 thing you had that I wanted. Honestly even if the variety of products increases I’m not going because I’d rather pay $30 shipping than do that again bc tbh it’d probs sell out.

How about finding a bigger space and making it permanent pls 😭

CLOSING THE SHOP ARE YOU FOR REAL?

ARE YOU KIDDING ME

I took some time off during the week cause I work every weekend so I won’t a chance to check the pop up now, 😔

While the re-opening date remains unclear, Universal Music is encouraging fans to keep an eye on the @umusic social media accounts for updates and details on when the pop-up will be back up and running.