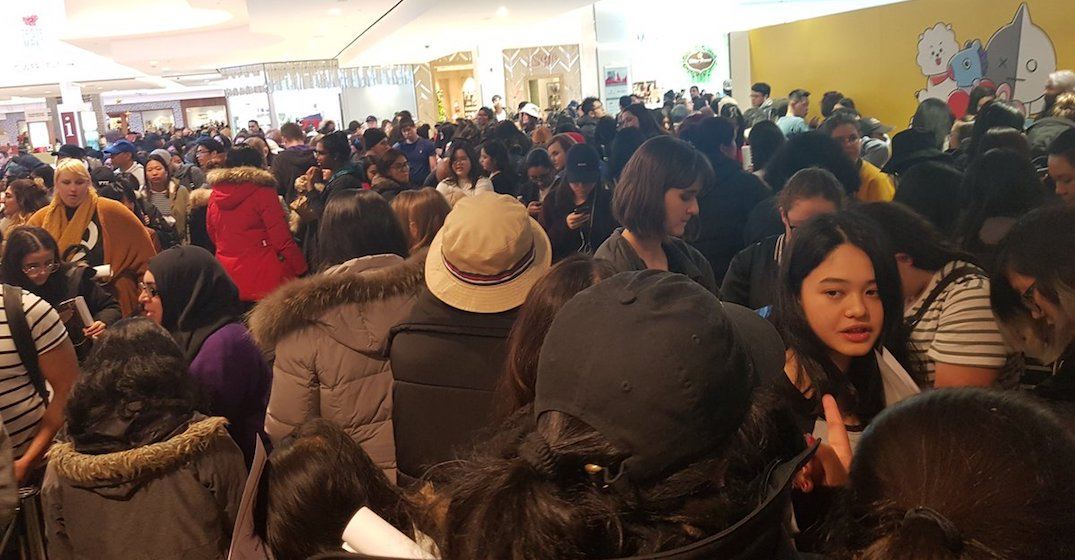 Fans came out in droves to Scarborough Town Centre Friday morning, to attend the opening day of the highly-anticipated pop-up for BT21 — a popular collaboration between K-pop superstars BTS and LINE FRIENDS.

BT21 lovers lined up early in the morning, with throngs of customers in lines that stretched and weaved through the mall.

While shoppers weren’t allowed into the pop-up shop until 10 am, the official line (yes, there was an official one) began at 6 am, and the first 700 customers received a free BT21 poster.

Similar pop-ups in New York City and Hollywood sold-out during their launches, and now BT21 fans in Toronto will have the opportunity to shop a wide range of BT21 merch, including limited edition BT21 Toronto apparel, only available at the local shop, which is open until December 7 (or while quantities last).

In case you didn’t make it to the opening of the pop-up, here’s how crazy the lineups were:

OMFg THE AMRY INVASION IS REAL HELP SEND HELP THEY ARE TAKING OVER THE MALL EVERYTHING IS SELLING OUT OMG #BT21Toronto #kpop #bts pic.twitter.com/WUDqiCUObv

Fans lined up for the BT21 Toronto Pop-Up store in STC! 🇨🇦

What are you most excited to buy? 😍 #BT21Toronto #KOYA #RJ #SHOOKY #MANG #CHIMMY #TATA #COOKY pic.twitter.com/ItBRcxjfZ0

We’re at the end of the line rn 🤣 #BT21Toronto pic.twitter.com/5XBFemGMRR

People are trading posters across the line up I’m wHEEZING #BT21Toronto pic.twitter.com/d7wTmckZ0l

Update on the line length at the Pop-Up store in Toronto. So many ARMYs are already here! ❤️

Fans will start being let in at 10AM, but staff are trying to push for earlier~ #BT21Toronto #KOYA #RJ #SHOOKY #MANG #CHIMMY #TATA #COOKY #BT21 pic.twitter.com/BImrpvTlPo

The line as of 8:30 at the BT21 store in Toronto skskskksk😬💜 pic.twitter.com/Vemfo9gjaw