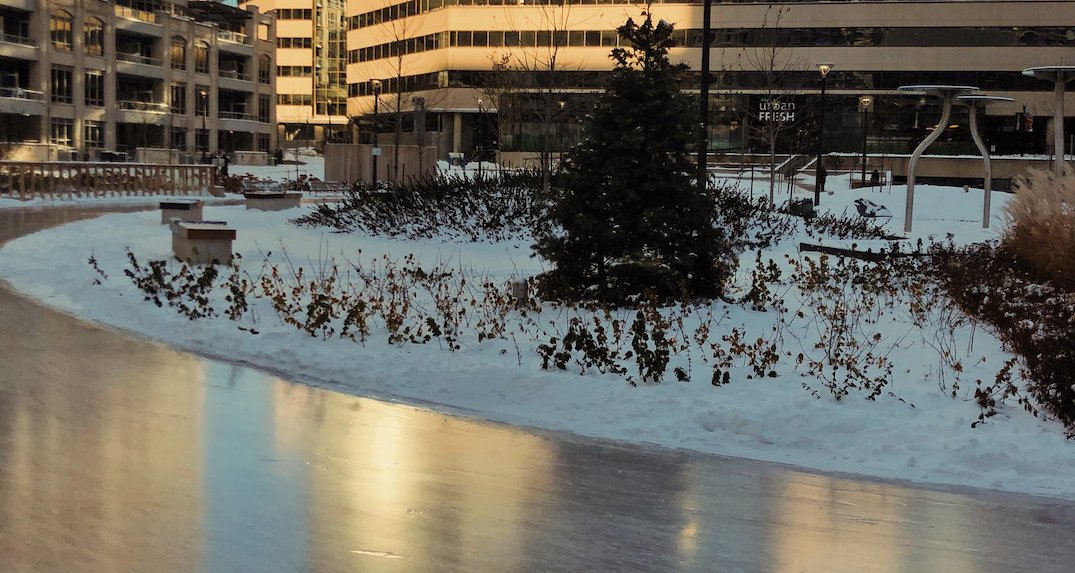 Time to lace up Toronto, a new skate trail has just opened up.

Located in College Park, the Barbara Ann Scott skate trail opened to the public over the weekend.

The trail, which is named after figure skater Barbara Ann Scott, an Olympic gold medalist who received the Lou Marsh Trophy three times as Canadian athlete of the year, is a five-metre-wide trail that loops through the downtown park.

TMRW is the official grand opening of the Barbara Ann Scott ice trail at College Park! 😍 Join us from 1-5PM for all the fun festivities. Don’t own skates? Don’t fret, the Toronto Public Library will lend free ⛸️ till 4:30PM. See you there! https://t.co/yEl851oLOZ #YongeLove pic.twitter.com/O0ehGdC1F1

The winding trail, which is designed to be a walking loop in summer, is the first exterior skating path in North America to incorporate state-of-the-art carbon dioxide technology in its refrigeration system.

This environmentally friendly technology is natural, non-toxic and non-flammable, with no net greenhouse gas effect.

This past summer, the city completed a multi-year revitalization of College Park, complete ample room for residents to sit, walk, and play.

Referred to as an “exhilarating and engaging outdoor experience that regenerates a vital public space,” the main new feature of the park is, of course, the impressive skate trail redevelopment.

Adjacent to the trail, an architectural construction of wood, glass, and stainless steel has been designed as the new rink house, warming station, and Zamboni storage.

“This ice-skating trail turns College Park into a destination that can be enjoyed throughout the year. Families can come out and experience this skating trail that takes an environmentally-friendly approach to a winter activity that is cherished by so many,” said Mayor John Tory in a statement.