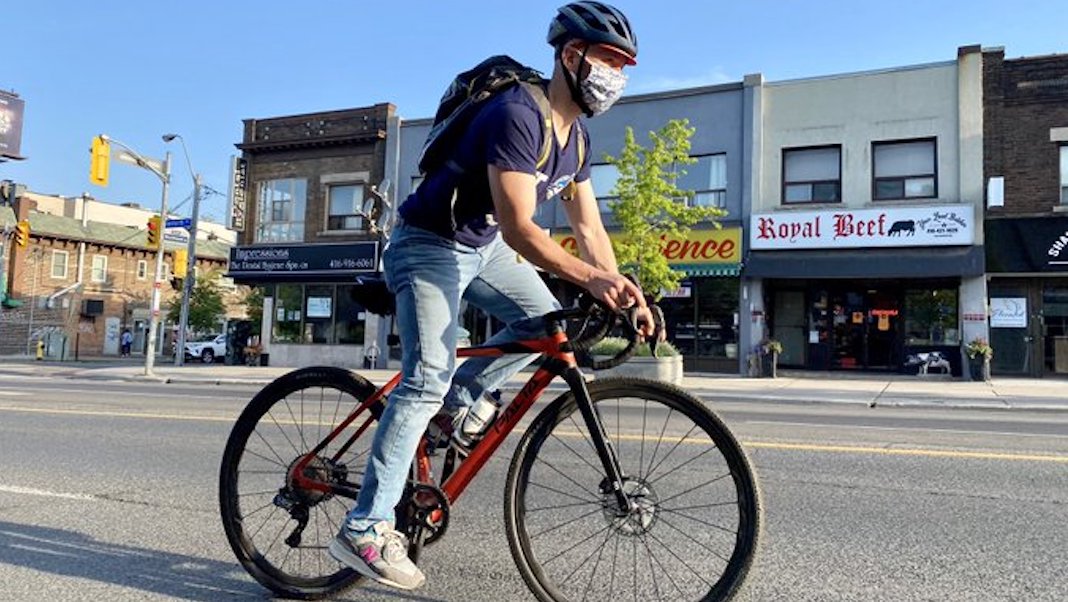 As the city continues to see less traffic, Toronto is looking to add about 40 km of on-street cycling infrastructure to encourage physical activity and support small businesses.

A report heading to City Council on May 28 outlines the Cycling Network Plan Installations, which includes the Bloor West Bikeway Extension, as well as new ActiveTO projects.

The Cycling Network Plan was updated to name Bloor Street as a Major City-Wide Cycling Route, according to the report from Transportation Services.

“Over the past year, Transportation Services has completed the proposed design, assessed impacts, and undertaken extensive business and community consultation on the Bloor West Bikeway Extension. The limits of the installation is proposed to be extended further west to Runnymede Road to connect to existing north/south cycling infrastructure,” reads the report.

And in response to the COVID-19 health crisis, City Council requested to look at the possibility of fast-tracking projects within the Cycling Network Plan.

Earlier this month, the City of Toronto announced its ActiveTO program, which was developed to ensure people have space to get around while respecting physical distancing. 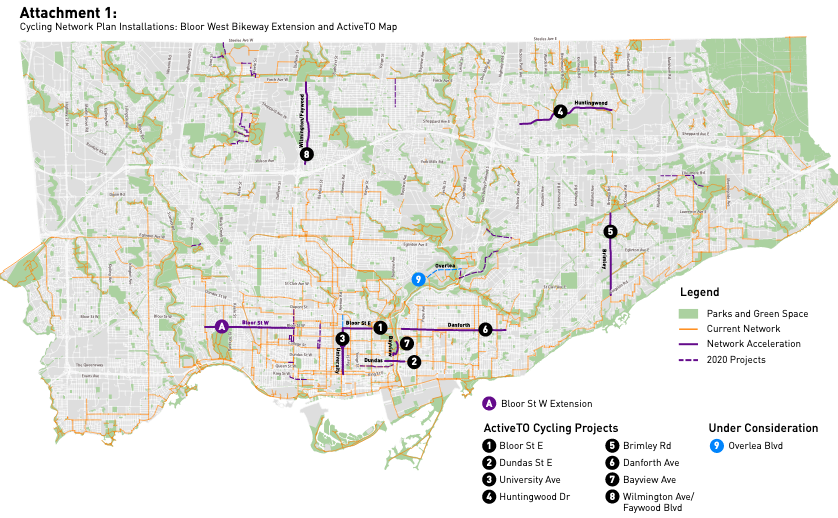 The City says that expanding bikeways will help increase mobility options for people as Toronto starts to reopen and the need for travel increases.

The cycling network plan looks at expanding rapidly through temporary installations by re-purposing curb lanes along key corridors, deployed as a network, or addressing network gaps as much as possible.

And according to the City, besides its ActiveTO projects, a more transformational Complete Streets approach is proposed for Danforth Avenue, in order to support the main street character and local economy.

“Right now, we are seeing car traffic and pedestrian traffic at an all-time low while bike traffic has stayed about the same,” said Mayor John Tory in a statement. “We know that will change in the coming weeks and months. We need more bike infrastructure to help people move around the city as the restart gets underway.

“We are working together to make sure we make major investments in the Danforth to help businesses have the space they need to recover economically and make sure residents have ways to get around the community and their city safely. Bikes bring business and will help drive economic recovery. We are going about this in a responsible, common sense way with public health, economic development, transportation services and local councillors all involved in making common sense, health focused decisions which broaden out our transportation network while helping main street businesses in a post-pandemic world.”

“Vibrant main streets are the heart and soul of our communities,” said Fletcher. “Enhancing the pedestrian experience and safety, adding cycling infrastructure while at the same time accommodating traffic flow and parking are important elements to encourage neighbourhood travel to the Danforth and help businesses at this difficult time.”

The pilot proposal says it would maintain on-street parking on both sides of Danforth while introducing turning lanes at intersections to help traffic flow, allow for additional space for patios to support local restaurants, and give businesses the space needed to reopen as quickly and safely as possible.

Our #ActiveTO cycling network plan proposes 40 kilometres of expanded and accelerated routes across the city.https://t.co/FqPgCwJtok

Along with the Danforth, the City will be looking to add more bike lanes in its centre.

They said that bike lanes on University Avenue (through Queen’s Park Crescent) and on Bloor Street “will provide relief to two subway lines, creating more space on the subway for those who need to ride transit, and offering a new cycling option that is safe and uses our limited road space as efficiently as possible to move the most people.”

The bike lane on University Avenue and Queen’s Park Crescent will connect to existing lanes on Bloor, College, Adelaide, and Richmond Streets, while the bike lane extension on Bloor Street will run from Avenue Road to Sherbourne Street.

“Building a bike lane along University Avenue means that the front-line workers in hospitals, medical clinics, and doctor’s offices can get to work each day safely,” said Cressy. “It also means that people who live in our community will have a real alternative to driving or the TTC – freeing up space so that those who need it can safely physical distance on our subways, streetcars, and busses.”

Thursday’s report is looking for Council authority to install cycle tracks on Bloor Street West, from Shaw Street to Runnymede Road, in addition to the following ActiveTO cycling projects:

Subject to the city’s approval, Transportation Services says it proposes to proceed with the installation of these projects in summer 2020.

Toronto City Council meets on May 28.