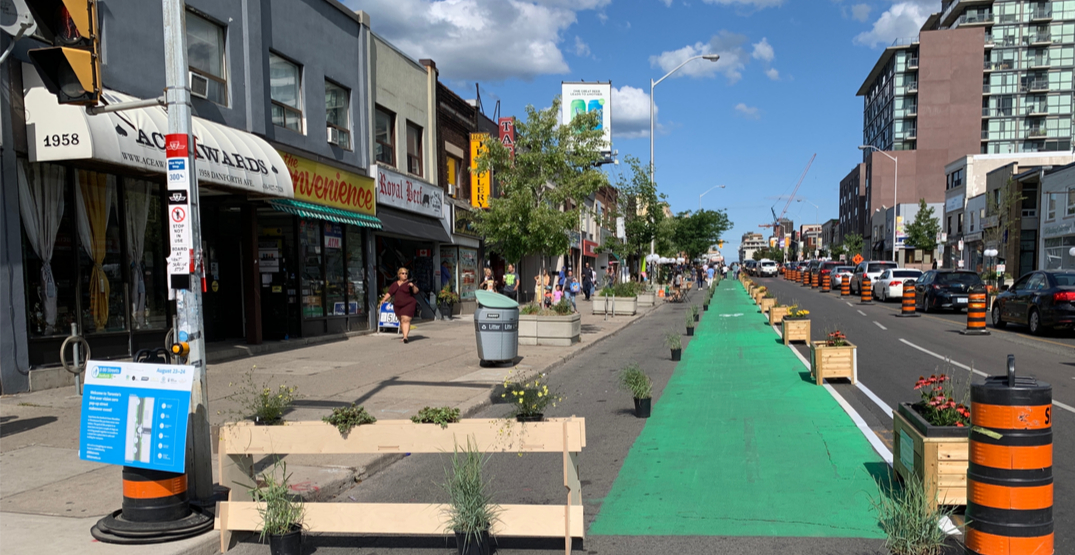 Though few people remember them now, Danforth Avenue once hosted a fleet of streetcars.

They were replaced in 1968 by the subway, but Colin Johnson, manager of the Danforth Mosaic BIA, says the surface rail vehicles proved beneficial to the local economy.

“If you talk to any of the older generation on the Danforth that own property, they always say that, when Danforth had the streetcar, people used to get off and peruse their business,” Johnson tells me.

Streetcars won’t be returning to Toronto’s east end thoroughfare, but Johnson thinks another vehicle could now serve as the merchant’s friend during these difficult times: the bicycle. Moving at a more leisurely pace than motorists, cyclists notice local stores and have the ability to stop quickly and shop.

“People can get off their bike much easier than they can when they’re going 50 kilometres an hour [by car],” he says. “It’s quite easy to get off your bike and check out a business you’ve always wanted to try.”

But to get folks cycling the “Danny” and supporting the local economy, the city needs to make the roadway less dangerous. Now, Johnson says, “It’s not particularly safe to bike on the Danforth… It’s actually pretty scary.”

There are bike lanes on a portion of Bloor and across the viaduct, but when cyclists hit the start of Danforth, at Broadview, the protection abruptly ends.

He acknowledges that opinions differ on the issue. He favours installing Danforth bike lanes on a trial basis, putting in a pilot and listening carefully to residents and businesses’ feedback.

The City is currently conducting a Danforth “complete street” study to improve road safety. A pilot bike lane is one option it’s considering.

“I think it is an experiment worth doing,” Johnson says. “It’s a good way of showing people that it can work and people enjoy it. I think it is something Danforth should definitely try.”

Johnson — whose BIA represents more than 500 local businesses — believes bike lanes could be especially useful as pandemic restrictions are eased and eateries are allowed to serve customers outside. “I find bikes and patios tend to go together,” he explains. “If it’s a hot summer day and you’re thirsty and you want a beer you get off your bike and have a drink.”

Mayor John Tory recently said he wants to allow patios to expand into some streets to facilitate distancing and support struggling restaurants — with provincial approval. Johnson would like Danforth to be included.

I ask him if his section of the city could be left behind — eclipsed by more bike-friendly parts of Toronto — if it fails to nurture active transportation. “Oh, 100%,” he says.

He believes his area should become a “neighbourhood [in which] you have everything you need within a 15-minute walking or cycling distance from your home. So that means you have a grocery store, a doctor’s office, a dentist, a bar.”

The Danny is already home to many fine entrepreneurs. If it showed a bit more love to folks on two wheels, it could enjoy even greater prosperity.

Johnson concludes, “We can make it ideal for business, make it safe for everybody, through things like bike lanes and improved transit.”