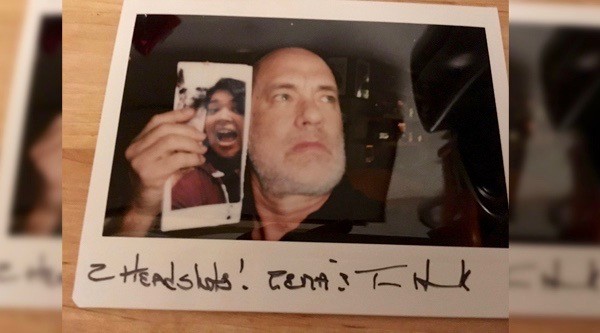 Tom Hanks responded to a Toronto woman’s request for a headshot with something even better.

Hank’s reply, now circulating on Reddit, includes a polaroid selfie of the film star holding up a photo of Zena (the letter sender) and a typewritten letter (seriously does Tom Hanks still use a typewritter? How charming is that?), that calls Toronto a “damn fine town,” acknowledges the condo boom, and notes that we have “Nice views, I guess.”

Doesn’t he know the Views from The 6ix are famous? The letter notes that Hanks hasn’t been to Toronto “since one of the Film Festival dates sometime back,” presumably at the premiere of Cloud Atlas in 2012 when he lodged a formal complaint with TIFF organizers for running “celebrities through a pen like [they’re] bulls on the way to slaughter.”

Regardless, it sounds like the incident hasn’t soured Hanks on the city. Hopefully, he’ll visit again soon. Judging by the response on Reddit, he’d be more than welcome.