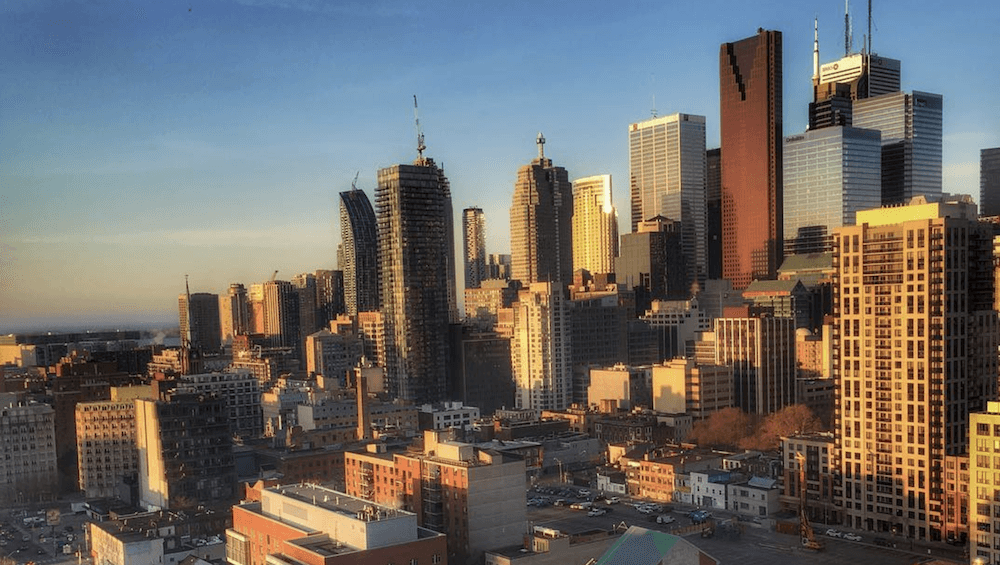 Oh hey, sunshine! Welcome to the weekend in Toronto.

Head outside and check out these awesome events in and around the city this lovely weekend!

Concrete Rush will test you with a short course urban obstacle challenge like no other. Over 12 challenging obstacles from a number of Canada’s Top Obstacle Series make up this 2 km course at Nathan Phillip’s Square in the heart of the City of Toronto.

Cherry Blossoms Day will continue to bloom in High Park this weekend. Grab a picnic and take a stroll through one of Toronto’s favourite outdoor spaces. This natural spectacle is top quality free entertainment, so don’t miss out!

Cold Brew Cocktail Week wants to convince you that booze and cold coffee go together better than peanut butter and chocolate. This is your chance to combine the booze and caffeine buzzes you love in new and innovate ways!

Where: Various locations
When: April 28 to 30

The annual Hot Docs Film Festival is back again and promises to be better than ever. Fancy seeing the Whitney Houston documentary Can I Be Me? Or how about the much anticipated A Better Man? Produced by Sarah Polley, it’s a film that takes an in dept look at domestic violence. When all is said and done, there’s something for everyone at Hot Docs!

When: April 28 to May 7
Where: Various locations

Canadian singer-songwriter Ron Sexsmith released his latest album The Last Rider this year. The St. Catherines’ native is taking the album on the road, with a stop in Toronto this weekend.

The Soctiabank Contact Photography Festival is back, and will be celebrating Canada’s 150th anniversary. The largest photography festival in the world, this year’s event brings pieces that challenge notions of our country’s identity, and celebrate our ever-changing landscape. It sounds woke AF. Opening night will take place on April 28th at the Ryerson Image Centre.

When: Ryerson Image Centre
Where: April 28 at 7 pm

Classic Albums Live and its roster of A-list musicians from across the country perform rock favourites exactly as you remember hearing them. Each season features four albums culled from the canon, brought to you live, note for note, cut for cut. Tonight’s focus is Elton John.

Climate March for The Planet, Animals, and People

Unite with Washington and the World to stand up for this beautiful Earth we call home.

On April 29, North Shore Pie Co. will be giving out free mini meat pies and cookies to celebrate the opening of their new location in Roncesvalles. There will be a pie eating contest and two lucky winners will win a free family sized meat pie!

The beloved Canadian story The Hockey Sweater is brought to life through music in the TSO co-commissioned work of the same name. Just in time for the 2017 Stanley Cup playoffs, this charming winter classic, narrated by author Roch Carrier, will appeal to all budding hockey fans.

The East Coast Charity Ball is East Coast Connected’s (ECC) flagship fundraising event in support of the IWK Foundation. The evening will include live entertainment and an auction with over 500 guests expected.

American ambient music producer Tycho received a Grammy nomination for his album Epoch. Known for his singles “Adrift,” and “Awake,” Tycho has also remixed tracks by Thievery Corporation and Death Cab for Cutie. Catch him in town this weekend.

Georgia O’Keefe at The AGO

The name Georgia O’Keefe is synonymous with American Modernism.  now you have a chance to see her masterpieces IRL at the Art Gallery of Ontario!

Where: The Art Gallery of Ontario
When: Now until July 30

Bring your mat and join Steam Whistle for a morning yoga session at the brewery located in the historic John St. Roundhouse. 100% of proceeds will be donated to the The Ontario Ride to Conquer Cancer.

This interfaith festival is open to all and will showcase some of the cultural achievements of our city’s different traditions. Come and enjoy an afternoon of food, song, dance and entertainment from many of the world’s great faith traditions.

Where: Tibetan Canadian Cultural Centre, 40 Titan
When: April 30 at 2 pm