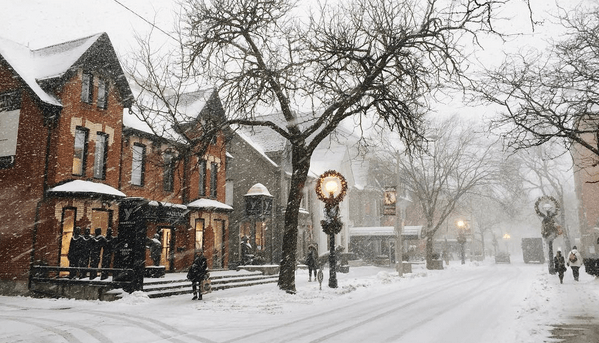 Besides Netflix and chilling with a MASSIVE blanket, check out these (mostly) indoor events and holiday markets in Toronto this weekend!

The outdoor market at Don Mills continues, featuring a collection of seasonal and artisan vendors, live music, food and drink, a warm-up lounge hosted by Jack Astor’s and a strolling Santa.

Sass up your weekend with a little Britney! This class is by donation, and will get you dancing to the queen of pop.

Where: Lower Ossington Theatre, 100A Ossington Avenue
When: December 16 to 18

Symphony of the Sea

Featuring three 45-minute sets by the Toronto Concert Orchestra throughout the evening,  hear your favourite holiday classics live! Wander through the aquarium while you sip on a drink from one of our many cash bars as you take in the underwater views – and melodies.

Where: Ripley’s Aquarium, 288 Bremner Boulevard
When: December 16 at 7 pm

The Raps are back at home. Cheer them on as they meet the Atlanta Hawks tonight!

This 2-hour holiday cruise through the Toronto Harbour will include food stations, a costume contest (ugliest outfit wins!), and a complimentary Bad Santa photo booth.

Because what is the holiday season without a little Kevin McAllister? Clearly a fan fave, this is the third annual Hot Docs Home Alone Quote-Along. Get ready to get rowdy!

Where: Artscape Youngplace, 180 Shaw Street
When: December 16 to 18

LA-based producer Borgeous is back in the 6ix, bringing his big room house sound to Uniun Nightclub. The popular touring DJ has collaborated with many other producers such as DVBBS, Dimitri Vegas, and recently tyDi. He’s also worked with Canadian Lights for his single “Zero Gravity.” Check him out tonight!

Where: Uniun Nightclub, 473 Adelaide Street West
When: December 16 at 10 pm

After a brief hiatus, BeerProv returns to Comedy Bar this weekend with its unique brand of beer drinking and giggle inducing comedy.

Where: Nathan Phillips Square, 100 Queen St West
When: On now until December 23

Toronto’s Christmas Market brings the spirit of the season to life! It’s the last weekend to catch the festivities. If you haven’t checked it out yet, make sure to head down soon.

My Makeup Brush Set is having their biggest sale of the year. This is your chance to access luxurious Makeup Brush Sets, Cosmetic Palettes and Beauty Tools at prices that can’t be beat!

Remember Saturday mornings? Kids today may not realize the significance of the Saturday morning ritual, but once upon a time, we had to wait a whole week to get our cartoon fix, and when we got it, we tended to binge. In that gleefully gluttonous spirit, curator Kier-La Janisse presents a 3-hour trip down memory lane with a tribute to the eye-popping, brain-addling Saturday morning cartoons of yore, complete with a smorgasbord of delicious sugary cereals!

Usher in the holidays with the angelic voices of more than 300 choristers joined by the TCC Alumni Choir. The choirs will perform seasonal favourites and the Main Choir will present a special ‘musical’ reading of Dylan Thomas’s A Child’s Christmas in Wales, with orchestral arrangements by Nancy Telfer.

Where: Royal Thomson Hall, 60 Simcoe Street
When: December 17 at 2 pm

Shop at the local artisan market, meet Father Christmas, participate in Leslieville’s Best Soup Competition, and taste wine and beer from the neighbourhood!

Selfie with Santa and your dog

Santa is making his stop at D & C Palace to take photos and hand out treats to all the good dogs. Bring your dog and take your own personal photo with Santa. All donations for santa selfie will go to the Toronto Humane Society.

Where: Four Seasons Centre for the Performing Arts, 145 Queen Street West
When: On now until December 31

ELF!! I LOVE HIM! Actually though, Elf is on this afternoon for free! It’s part of the Hot Docs Holiday Classics, and a way to complete your Christmas.

If you couldn’t make the Britney dance class on Friday, here’s another chance to get your sass and fierceness on this weekend! Steps Dance Studio has a charity class that you won’t want to miss.

Founded in 2015 by Silverstein, Stay Warm highlights and brings together likeminded underground acts in the heavy metal and rock genre, with the goal of raising the profile of the collective music scene in Toronto. The goal is to showcase a diverse and talented set of Canadian and Internationally acclaimed artists over two days.

Where: The Danforth Music Hall, 147 Danforth Avenue
When: December 17 and 18

The One LUV Benefit Concert will include non stop entertainment and soul, and it’s for a great cause! The event will help feed and donate gifts such as clothing and nonperishable goods to 200 homeless people from the LGBTQ community on December 23, 2016, at the 519 Community Centre in Toronto.

It’s baaack! Harbourfront Centre’s DJ Skate Nights start up this weekend, and they’re sure to heat up your Saturday nights.

She Wants Revenge burst into the indie rock scene back in 2004. After a brief hiatus, the band regained popularity in 2015 while appearing on the “American Horror Story” soundtrack. They began touring again, announcing their 10-Year Anniversary Tour and will be performing Debut Album front to back.

Where: The Phoenix Concert Theatre, 410 Sherbourne Street
When: December 17 at 8 pm

One More Time With Feelings

With an intense and intoxicating intimacy, music legend (and Bad Seed) Nick Cave allows the camera to capture his artistic process in creating his latest album The Skeleton Tree in the face of personal loss. This gut-wrenchingly honest documentary was originally conceived as a one-night-only screening to launch Cave’s album, but this unique concert doc is back thanks to tremendous popular demand.

The inaugural indoor holiday market curated especially for Toronto’s vegan community is taking over the Great Hall on Sunday and will showcase an array of vegan foods, crafts and ethical goods geared towards cruelty-free gifting.

Where: Moksha Yoga Bloor West, 2481a Bloor Street West
When: December 18 at 2 pm

Where: Roy Thomson Hall, 60 Simcoe Street
When: December 18 at 3 pm

Brampton’s Roy Woods had a busy year touring with Drake on the Summer Sixteen tour. Signed to OVO Sound, Woods released his album Waking at Dawn earlier this year, and is now on his solo North American tour. Welcome home, Roy!

Love is in the air this holiday season—a lot of love, and a lot of laughter. From the makers of Bridget Jones’s Diary and Notting Hill, comes a singularly splendid romantic comedy that’s overflowing with heartwarming romance, witty banter and Christmas cheer. Love Actually shares the stories of eight couples and all the ways their lives intertwine with a star-studded cast. This is part of Hot Docs’ holiday classics screening!

Yeezy Taught Me – A Night of Kanye

To all those disappointed by the cancelled Kanye West “Life Of Pablo” tour stop in Toronto, the party will serve as a tribute to the music of Kanye West. In light of Kanye’s current condition, a portion of the proceeds will be donated to CAMH to support Mental Health initiatives. The event is an opportunity for fans to celebrate the music + career of Kanye West while spreading awareness about mental health and supporting those living with them every day.