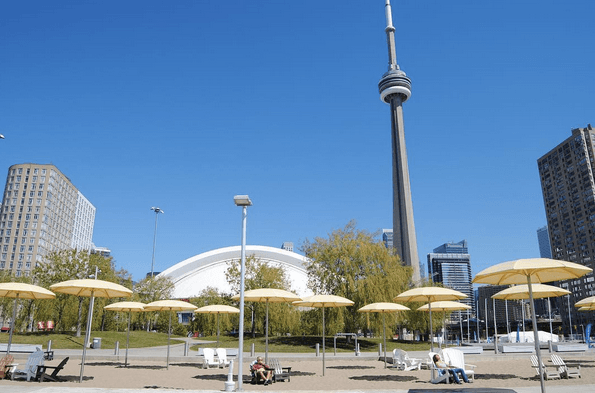 This sunny day is only the start of an incredible Thanksgiving, and the city is packed with events. From art to music, and everything in between, there’s enough to keep your calendar busy for the next few days.

We are thankful for you, and hope you have an incredible long weekend, Toronto. *heart emoji*

Big fans of the show, listen up! This is your chance to claim all the glory of knowing everything about Dennis, Dee, Charlie and Mac! Tonight’s trivia covers season 5 to 9 so brush up on that knowledge.

Friday Night at the ROM is back with live entertainment, DJs, and themes to take you away while exploring the stunning galleries! Tonight’s theme: Thanks Canada.

Three albums and world domination, James Blake is one of the biggest names in the electronic music world. The award-winning musician has been featured in many music projects from Drake to Frank Ocean and Beyonce, and he’s in town this weekend.

The Interactive Comedy Show for Horrible People (based on the award-winning format created by Daniel Chai & The Fictionals Comedy Co.) Improv Against Humanity combines the thrill and risqué content of the board game, Cards Against Humanity with the hilarity of live comedy!

Where: The Social Capiral, 154 Danforth Avenue
When: October 7 at 8 pm

Encounters of the Spooky Kind

Kung Fu Fridays has returned to The Royal! It kicks and punches its way back onto the big screen, harder and faster than ever before. Join the monthly martial arts screenings with video pre-shows and a raffle for fu-tastic prizes from Silver Snail.

Where: The Royal Cinema, 608 College Street
When: October 7 at 8 pm

If you’re looking to spend the evening clinging onto your date for dear life, make sure to check out Screemers, Canada’s premiere scream park! Starting this weekend, Exhibition Place will be transformed into a terrifying zombie land, filled with seven themed haunted houses and the Midway of Mayhem.

Where: Exhibition Place
When: October 7 to 31

Where: Mel Lastman Square
When: October 8, from 1 to 6 pm

Bringing together a mix of crafters, artisans, chefs, and bakers, this free event took place over the weekends throughout the summer, and returns for Thanksgiving weekend.

Alleviate your frustrations for FREE this weekend at the newly launched Rage Room presented in collaboration between Battle Sports and the Riddle Room. Admission is free on first-come-first-serves basis for one day only on Saturday, October 8 and includes five plates to smash (usually $25).

Enjoy all things Autumn! Ride the Pumpkin Express train through the venue to witness everything PumpkinFest Toronto has to offer! From a traditional Farmers Market and Baked Goods sale to our Princess Meet and Greet. Family fun all weekend long!

Check out Toronto’s biggest beer garden on the water this Saturday! Bavarian music, accompanied with 1 L steins of Steam Whistle beers, and a buffet of German classics like traditional Bratwurst Sausage and Schnitzel.

Get some symphony in this weekend! Two brilliant young musicians—a conductor, whom the Cincinnati Enquirer has praised as “a rare and special talent,” and a violinist whom the BBC chose as a New Generation Artist—team up for this program of rich and engaging favourites.

It’s the light battle you’ve been waiting for! Check out Saturday’s Blow Sword Battle for a whole lot of Jedi fun.

Josh Davis is back in Toronto! The man better known as DJ Shadow has been taking the electronic world by storm since he emerged in the early 90’s. The legendary producer is known for his live performances, so don’t miss it.

Where: Phoenix Concert Theatre, 410 Sherbourne Street
When: October 8 at 9 pm

Future is set to host and perform at Rebel – formerly the Sound Academy – this Saturday. The announcement comes after his performance with Drake at the Air Canada Centre was cancelled. Blase blase your way into Rebel!

Perhaps you’re not a Future fan, but you love the grooves that Duke Dumont brings? You’re in luck, as the producer is in town for a show at the Hoxton with Mikey Palermo and Marco Marz.

Serving up a classic brunch with cinnamon-smothered french toast, fresh fruit and hickory smoked bacon over the Thanksgiving weekend, this 2-hour getaway on the water is the perfect opportunity to take in Lake Ontario’s fall colours this season.

South African-born American band Kongos are in Toronto this weekend with The Joy Formidable! Check out this rockin show on Sunday evening.

Where: The Danforth Music Hall, 147 Danforth Avenue
When: October 9 at 7 pm

Torontoberfest will feature a dynamite lineup of Ontario craft brewers to close out the season at this Oktoberfest-themed celebration. Events are free, all ages, and no tickets are required!

Where: Koerner Gardens, Evergreen Brick Works
When: October 10 at 12 – 5 pm

Get some CFL in this long weekend! The Argos are playing the Calgary Stampeders, and there’s no better way to end your Monday.

Because nothing goes better with a pumpkin spice latte than a real pumpkin! Check out one of the many pumpkin patches all over the GTA this weekend for the ultimate Thanksgiving weekend.

Where: Various patches
When: All weekend long