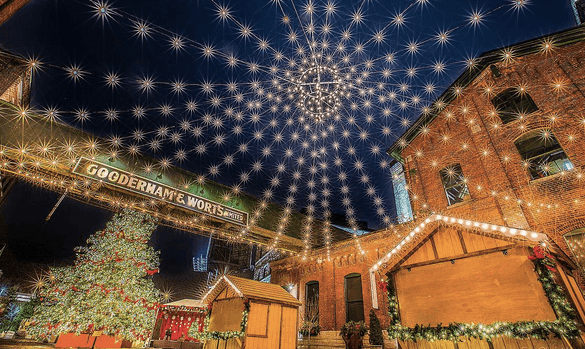 Feels like it was just yesterday that Mariah Carey was in town to hurry Christmas in Toronto.

And it’s here now (thanks, Mariah). It’s time to celebrate the cold weather, the upcoming new year, and this holiday season with our friends and family. And if you’re looking to head out of the house, check out what’s going on this long weekend in the city.

Have a great Christmas (and Festivus) weekend, Toronto!

Celebrate the holiday season at the City of Toronto’s annual Christmas Concert. Beginning at 11:30 am in the Rotunda of City Hall, the concert will feature local choirs: All the King’s Voices, Toronto Beaches Children’s Chorus and Toronto Mass Choir. They will be joined by the Tower Brass and organist James Bourne, while popular Toronto media personality Adam Wylde will once again emcee. As always, Santa Claus will make a special guest appearance.

Ballet on Screen: The Nutcracker

Holiday favourite The Nutcracker is without question one of history’s most cherished ballets. In honour of choreographer Peter Wright’s 90th birthday, The Royal Ballet brings back his unique and much beloved 1984 production once again.

Enter a world where adventure is awaiting and courage leads the way at Disney On Ice presents Dream Big. Through enchanted pixie-dust, Tinker Bell takes you on a journey of beloved Disney tales LIVE ON ICE. High-flying jumps, daring acrobatics, breathtaking skating and lovable Disney friends make this an experience your family will never forget.

Where: Rogers Centre, 1 Blue Jays Way
When: Now until January 1, including shows on Christmas eve, Christmas Day, and two shows on Boxing Day

The Strumbellas with The Zolas

In addition to their matinee show, beloved band The Strumbellas play the Danforth Music Hall tonight with the Zolas. Remember to bring a non-perishable food item or unwanted winter clothing to the show for donation.

Continue celebrating the spirit of the season at the Evergreen Winter Village. From shopping to skating, and a weekend farmer’s market, this is a must do this weekend!

Festivus: A Festivus For The Rest of Us!

Celebrate Festivus by watching the Festivus episode “The Strike,” then begin the “Airing of Grievances,” followed by “Feats of Strength.” The rest of the evening will be dedicated to Seinfeld trivia and a few surprises!

What: Based on the hit film, Sister Act tells the hilarious story of Deloris Van Cartier, a wannabe diva whose life takes a surprising turn when she witnesses a crime and the cops make her go into hiding at a convent.

Where: Lower Ossington Theatre, 100A Ossington Avenue
When: December 23 at 7:30 pm

Where: Four Seasons Centre for the Performing Arts, 145 Queen Street West
When: December 23 at 7 pm and December 24 at 1 pm

There have been dozens of versions of Charles Dickens’ “A Christmas Carol” but none as darkly twisted and funny as SCROOGED, director Richard Donner’s 1988 spin on the holiday tale. And of course, Bill Murray is in it.

Kick off your Christmas with a night filled with audience participation, festive drink specials, a hilarious pre-show and more.

Christmas Dinner at One King West

Don’t feel like cooking a turkey dinner this year? Head to One King West for a delicious Christmas dinner and spend time with your loved ones while you relax and enjoy each other’s company.

It’s a Festivus miracle! Frank Constanza’s legacy lives on with a holiday dinner that’ll leave you without a single grievance to air. Late night celebrations will follow.

Toronto plays host to the preliminary round for the Canadian team at the 41st World Junior Hockey Championships.

Where: Air Canada Centre, 50 Bay Street
When: December 26 to January 2

After a day of shopping, head down to the Drake for What’s in the Box. The comedy show features Leonard Chan, Carol Zoccoli, and headliner Darryl Purvis.

A wonderland which enchants adults and children alike, the CHIHULY exhibition is the inspiration for holiday activities. Make family memories that sparkle as you experience large glass sculptures, brilliantly coloured and dancing with light.

The Skittles Holiday Pawn Shop is back for its sophomore season, allowing Canadians to off-load their unwanted presents in lieu of rainbow flavoured treats or broker a deal with Dale the Dealmaker. The pawn shop is set to pop up on Queen West in Toronto on Boxing Day and while candy will be the main currency in-store, pawners will also have a chance to win candy-coated creations from Canadian celebrities.

The Toronto Comic Book Show has quickly become Ontario’s hottest pop-up comic book event and sale. And this Monday, they will be having a sale event!

Just because it’s below freezing weather outside, doesn’t mean the venues can’t heat up. And it also doesn’t mean we can’t have a music festival! Solaris Winter Music Festival returns with Marshmello, Zedd, Borgore and more play the two-day fest taking place at Rebel.