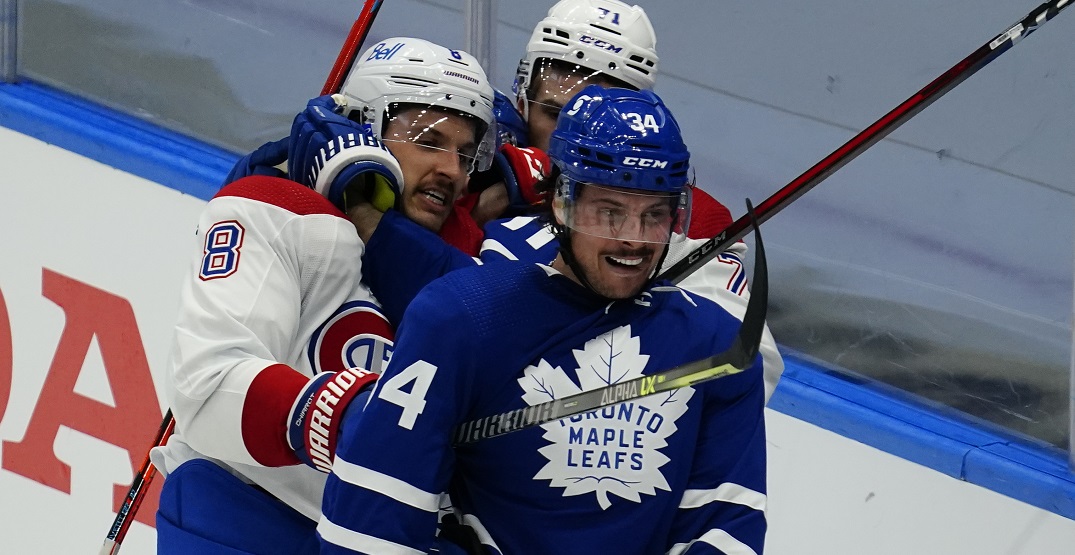 After Toronto Maple Leafs captain John Tavares was transported to hospital last night during the first period of the team’s playoff opener (he’s since been released as it was announced he suffered a concussion), the game result was secondary, which feels like a strange thing to say.

The Leafs fell 2-1 to the Montreal Canadiens in their first playoff matchup against each other since 1979. So much for the division-winning Leafs waltzing right through the fourth-seeded Habs.

It is so rare that losing a playoff game in a best of seven — to your eldest rival, no less —  is the subordinate point of the game story, but how could it not be?

It is unlikely Tavares would be available for the Leafs anytime soon, as he is still a long away from being cleared to play.

Here’s what the Leafs need to do to overcome the absence of #91.

1. The star players need to produce

A William Nylander goal was a welcome addition to last night’s circus of a game. But both Auston Matthews and Mitch Marner were held pointless on the evening.

It is just one game, of course, and even the best players can’t convert on every chance. They just need to get going if the Leafs are hoping to win this series.

If the Marner/Matthews combo starts scoring like they are known to do, that’s the easiest boost for Toronto’s chances at tying up the series.

2. Foligno needs to prove why Leafs traded for him

After Tavares’ injury, Foligno stepped up and went through a bit of a fight that was more like a short sparring session against Corey Perry.

If Foligno scores just one goal this series, households across Ontario will explode.

Outside of the traumatic experience of seeing a captain and a teammate get sidelined in such a devastating way, head coach Sheldon Keefe and the Leafs still have a whole rest of the series to get through.

Here’s how the Leafs lined up at practice, per Sportsnet’s Chris Johnston:

Alex Galchenyuk slots in for his first career Leafs playoff game, while Foligno is bumped up to the second line centre role in Tavares’ absence. There will likely never be a greater test as a Leaf for Foligno than right now.

Pierre Engvall slots in on the third line for Riley Nash.

3. Jack Campbell needs to keep up his form

In his first career playoff start, Jack Campbell played well enough to win most Leafs games. He did let in the winner in the third period on a nice shorthanded goal from Paul Byron, but made 28 of 30 stops in a pretty solid performance.

Unfortunately for the Leafs, they didn’t hit the back of the net more than once. Campbell missed Friday’s practice, likely just to rest.

Jack Campbell is not on the ice at #leafs practice. Frederik Andersen and David Rittich are the two goalies.

If Campbell lets in two goals or less every game, the Leafs should have a great chance to win the series.

4. Sheldon Keefe has to be creative

There’s nothing quite like being thrown a curveball with your captain being out indefinitely halfway through your first playoff game, and nobody in the organization has their work cut out for them more than Sheldon Keefe.

Tavares has missed just seven games in his three years as a Leaf. If Foligno works well on the second line, great! But if he doesn’t, Keefe has to figure out exactly what the plan is and how to best utilize the rest of his forward group.

There was a goal scored while the Leafs were on the power play. It was not scored by the Leafs, with Byron’s goal coming while the Canadiens were down a man.

The Leafs also took three delay of game penalties by shooting the puck over the glass.

Both are likely more flukes than anything, but the Leafs need to win the special teams battle if they have hopes of still winning this series.

Game 2 gets underway Saturday night at 7 pm on CBC and Sportsnet.