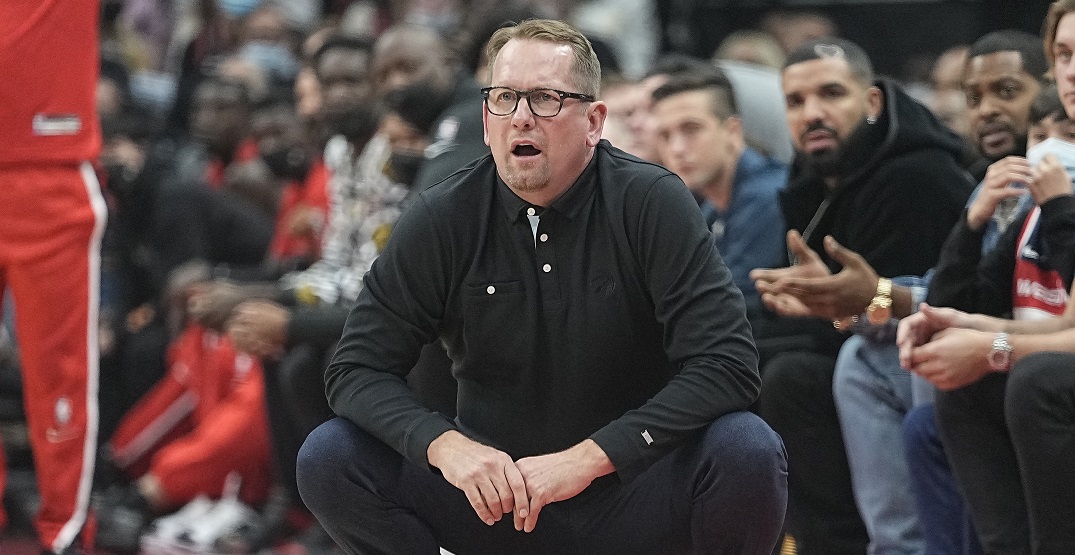 The Toronto Raptors shooting woes this season have turned winnable games into a pair of avoidable losses.

With a 1-2 start through their first three games, the team’s lack of long-range scoring has been a big issue to begin the year.

From beyond the arc, the Raptors are shooting 28-106, a  dismal .264 shooting percentage. That ranks 29th in the league, ahead of just the Detroit Pistons.

Even in Toronto’s blowout 115-83 win against Boston on Friday night, the Raptors still only went 10-35 on three-point shooting attempts.

For a team that lacks a player over 6’9″ inches to get dirty in the paint (and with All-Star forward Pascal Siakam still injured), it’d only make sense that Toronto would look to the long ball to increase their scoring this season. But it hasn’t quite panned out that way so far.

The good news is: there’s no way the Raptors continue at this pace.

No team in the NBA has shot under .300 from three-point range since the 2001-2002 Philadelphia 76ers, a full two decades of basketball advancements ago.

But there are still enough alarm bells that it’s worthy of pointing out how much the Raptors have struggled so far from beyond the arc.

OG Anunoby shot 2-9 on opening night from long range against Washington, and 0-5 against Boston on Friday. But Anunoby rebounded, going 5-9 on Saturday against Dallas.

Fred VanVleet hasn’t had a positive shooting night so far either, going 1-9, 2-5, and 2-9 on three-pointers so far this year.

Off the bench, Chris Boucher’s 2-15 shooting performance stands out. He’s had two nights of 1-6 shooting from beyond the arc in his first two games, while also going 0-3 last night. Boucher ranks ninth on the team in minutes, but tied for third in three pointers attempted.

It’ll likely be the veterans carrying the shooting load.

Newcomer Scottie Barnes has been arguably the Raptors’ best player on both sides of the floor this season, but his lack of an NBA level jumpshot has been the biggest point of growth throughout the scouting process.

Out of the Raptors’ six players in either their first or second NBA season, just second-year guard Malachi Flynn has had a history of making consistent shots from beyond the arc. Flynn hit 54 three-pointers in 47 games with the Raptors last year. But he has played just three minutes to begin the season, stuck in the rotation behind Goran Dragic and Dalano Banton.

Of course, it is super early in the season. It’s much easier to say the Raptors simply need to shoot better than to have a concrete plan to fix it, whether that’s through internal progress or making a trade for a talented shooter.

But it’s also clear that if the Raptors want to make a playoff push, they can’t continue missing as many deep shots as they have to begin the year.