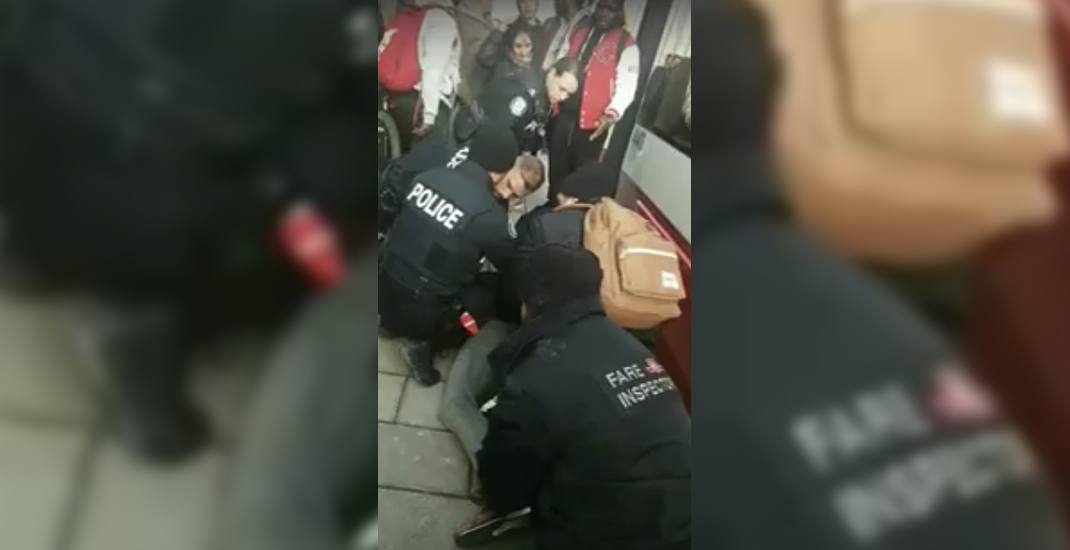 A 19-year-old Black man is taking the TTC and Toronto police to court.

The teenager, whose name is being withheld in the legal documents, and his mother have launched a $3 million lawsuit alleging he was racially profiled when he was pinned to the ground outside a streetcar in February.

Over Family Day weekend, a video was taken by Beth McBride, who had hopped on the 512 streetcar outside of St. Clair West subway station. McBride witnessed the teenager getting off at Bathrust, when he was grabbed by a fare collector.

According to McBride, two TTC collectors “proceeded to restrain him, take him off the streetcar and detain him on the ground.” The boy was was cuffed.

“He was screaming that he hadn’t done anything and that they were hurting him,” McBride told Daily Hive at the time. “They held him down about twenty mins. More officers arrived they pulled him off the ground and took him towards the cruisers. He looked banged up, terrified and humiliated.”

The TTC said it was conducting an internal investigation of the incident.

“We are currently conducting an internal investigation, including reviewing video to determine exactly what happened and why, and we will take appropriate action where necessary,” said TTC spokesperson Stuart Green in February.

The teenager’s suit claims that he was lawfully travelling on the streetcar and was preparing to exit when he was grabbed without warning, “causing him great shock and mental distress.”

The court documents state that the TTC fare inspectors and police used force “that was excessive, unreasonable, and not justifiable at law.” The teenager claims that he has suffered severe physical and psychological harm, and that he was detained and arrested because he was a young black man.