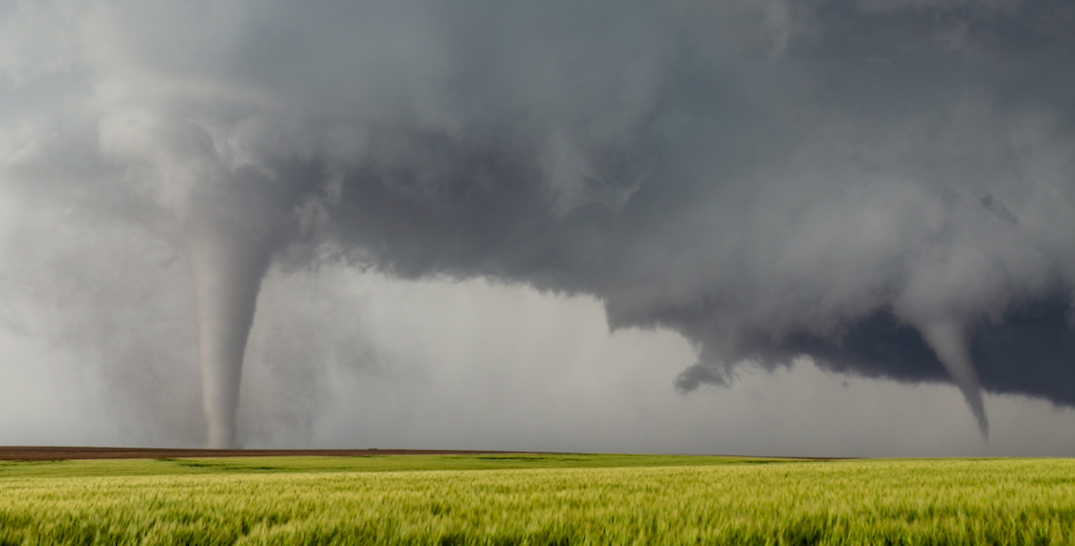 Over the past weeks, it seemed like Toronto was under several tornado watches.

And the Weather Network recently released a report showing a staggering tornado count in Ontario, saying the total for 2020 has nearly doubled the yearly average.

The report said the average has been just under 13 twisters a year, but 2020 so far had seen 23 with at least one additional tornado under investigation.

However, the analysis is challenged by Environment Canada.

According to a Warning Preparedness Meteorologist with Environment Canada, the statistics in the Weather Network’s findings are misleading.

“It’s important to understand how tornados are counted. This is critical,” Peter Kimbell told Daily Hive. “So when it comes to the tornado average, we don’t really know what it is, as many go undetected.”

He added that the yearly average most commonly used is 12 to 13, but this is based on decades of gathering statistics, which includes the early days of newspaper clippings to modern day sources like satellite imagery, radio coverage, and various weather stations.

And it also includes contemporary academic findings, like at Western University’s The Northern Tornadoes Project (NTP), which is creating more advanced ways to better detect tornadoes.

“We have better technology now to detect more tornadoes. So more tornadoes could have existed before, we just weren’t aware of them,” Kimbrell said.

An example he provided was the Barrie tornado in 1985, which was actually not just one tornado but part of a family of tornadoes.

“There were likely even more than we know of,” the meteorologist said.

He emphasized that we should not be comparing current tornadoes with an average that has been around for decades, “it’s like comparing apples and oranges.”

So while it might seem as if Ontario is experiencing more tornadoes this year, it may be that the province is just getting better at counting the natural occurrences.