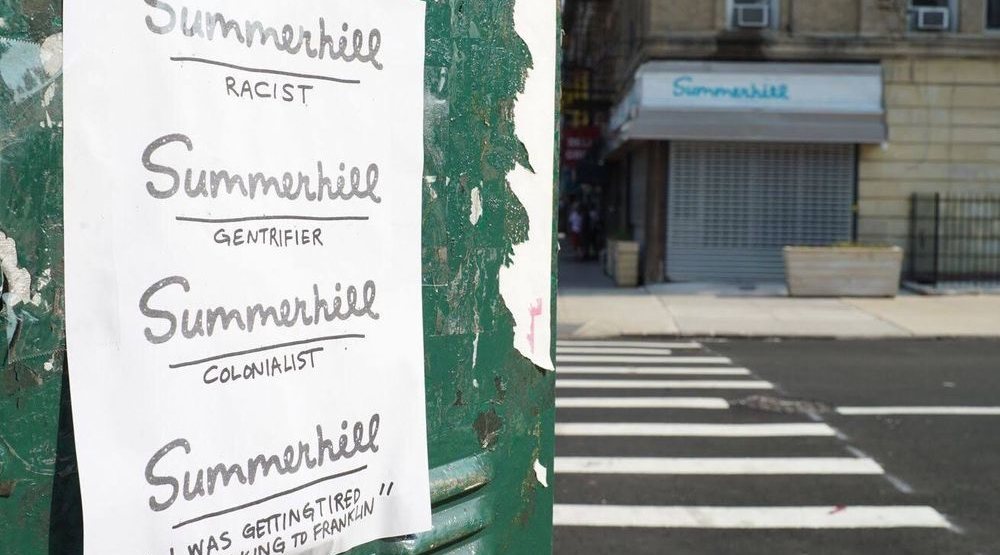 In Crown Heights, New York, Summerhill bills itself as a“boozy sandwich shop,” one that boasts “bullet holes” as part of its aesthetic and deals in 40-oz bottle of rosé.

It’s a newly opened restaurant from Toronto-to-New York transplant, Becca Brennan, who shared with Gothamist in a recent interview that, “…the decision to preserve the wall damage at 637 Nostrand Avenue and describe it as bullet holes for promotional purposes was a “cheeky” one.”

Unsurprisingly, locals in the neighbourhood are not amused by the marketing tactics and have accused Brennan of romanticizing gun violence and “slum cosplay.”

Recent coverage in Gothamist and Eater has also prompted a glut of negative reviews and comments across social media, and this weekend, area residents held an open forum outside Summerhill’s doors denouncing the business as a “racist,” “colonialist,” “gentrifier.”

From our spectator seats north of the border, we’re not especially surprised that the bar named for Toronto’s affluent midtown neighbourhood is having a hard time fitting into the Brooklyn borough.

Torontonians have proven equally unsympathetic to similarly out-of-touch efforts to gentrify its neighbourhoods.