Here comes the rain again… and lots of it. So much so that Environment Canada has issued a special weather statement for Toronto ahead of the Easter long weekend.

According to the weather agency, there is potential for significant rainfall on Friday and Saturday, that could range from 25 to 50 millimetres.

The rain comes as a series of low-pressure systems from the Southern Plain states impacts Southern Ontario. 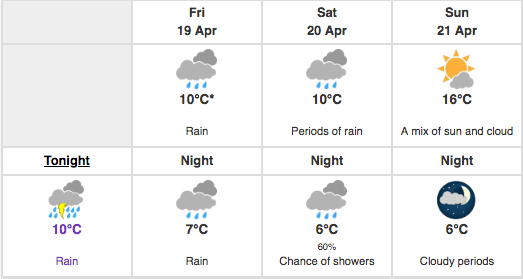 According to Environment Canada, although the ground is generally no longer frozen, it will still have a limited ability to absorb this rainfall. As a result, some ponding of water is possible in low-lying areas.

“The rainfall warning criterion of 50 millimetres of rain within 24 hours is not expected to be reached in general,” reads the statement.

But luckily it looks like the rain will pass just in time for the Easter Sunday, as a mix of sun and clouds is expected.