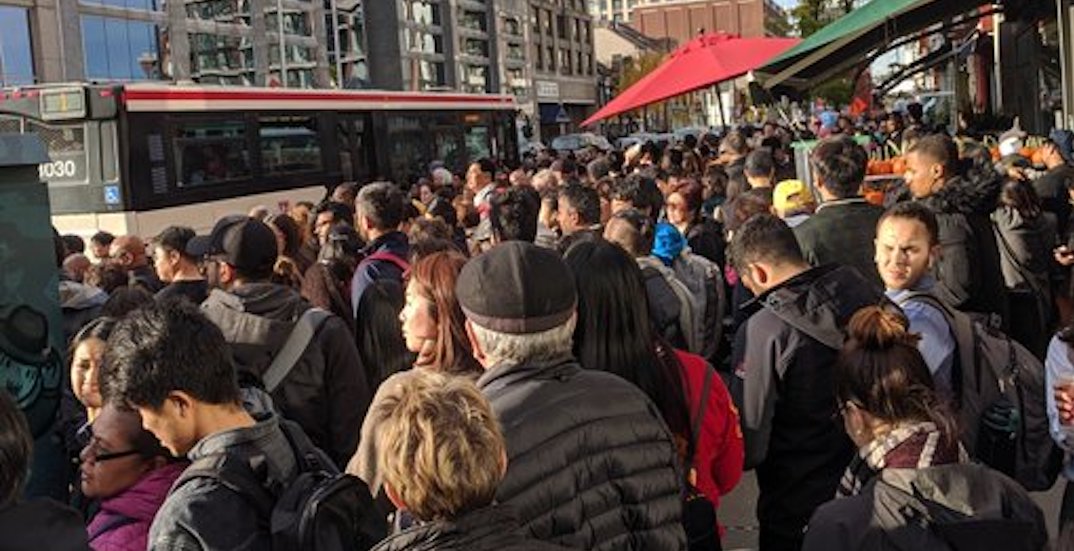 Tuesday ended on a rather stressful note for hundreds of Torontonians, after a fluke drilling mishap resulted in chaos and delays for TTC riders.

Ahead of the evening rush hour, not to mention the Raptors home opener, the TTC tweeted there was no service between Lawrence and St Clair stations after someone at ground level drilled a hole through the concrete and into the subway tunnel liner mid-way between Lawrence and Eglinton stations.

As a result, TTC spokesperson Stuart Green said service was suspended while crews investigated the extent of the damage.

A private contractor working at street level has reported drilling through the concrete #TTC subway tunnel liner mid-way between Lawrence and Eglinton Stns. Service is suspended while we investigate the extent of the damage. 50+ shuttle buses will run from St. Clair to Lawrence. https://t.co/akeeGrtsg4

In an attempt to ensure riders could get to where they needed to, the TTC deployed 50 shuttle buses to operate between St. Clair and Lawrence.

And as you could imagine, the subway was pretty chaotic leading up to the end-of-day rush, so Green said an additional 40 buses had to be deployed.

We have 90 buses ordered to deal with afternoon rush hour. Reverse GO protocol is in effect. Ride GO north from Union Station on a TTC fare.

As of 5:45 pm on Tuesday, Green said the transit authority had crews ready to plug and grout the hole and added that service was expected to resume in 30-minutes.

However, to ensure no more damage would be caused, trains heading northbound would operate at a reduced speed of 15 km/h through the area.

“Southbound should be unaffected. We will close the line at 10 pm for emerg repairs. Sorry, Raps fans. But safety first,” Green Tweeted.

And while some may have expected this meant their commute was about to get back on track, the absolute opposite occurred — the delays resulted in chaos at the stations.

Photos shared on social media show massive groups of people crowding on sidewalks waiting for shuttle buses to arrive, a scene that could make anyone feel claustrophobic.

One rider said the situation became “scary and unsafe” after people began fighting to get onto shuttle buses at Yonge and St. Clair.

You can see riders cramming together while they waited for the service suspension to clear during peak rush hour, which is definitely not how you want to end a long day.

Thanks TTC for the smooth comute home. The fare is so cheap right? We can’t complain. @ttchelps #ttc pic.twitter.com/Yk2MvX3ctm

#TTC no service between Eglington and Lawrence. People shoving & yelling; crowds getting bigger and bigger. Should I just walk to Lawrence? I’ve seen 3 buses in 30 mins pic.twitter.com/IotDH3gMLz

On the plus side the weather was perfect for a walk from Davisville to Lawrence. #ttc pic.twitter.com/mYbKOxrzuR