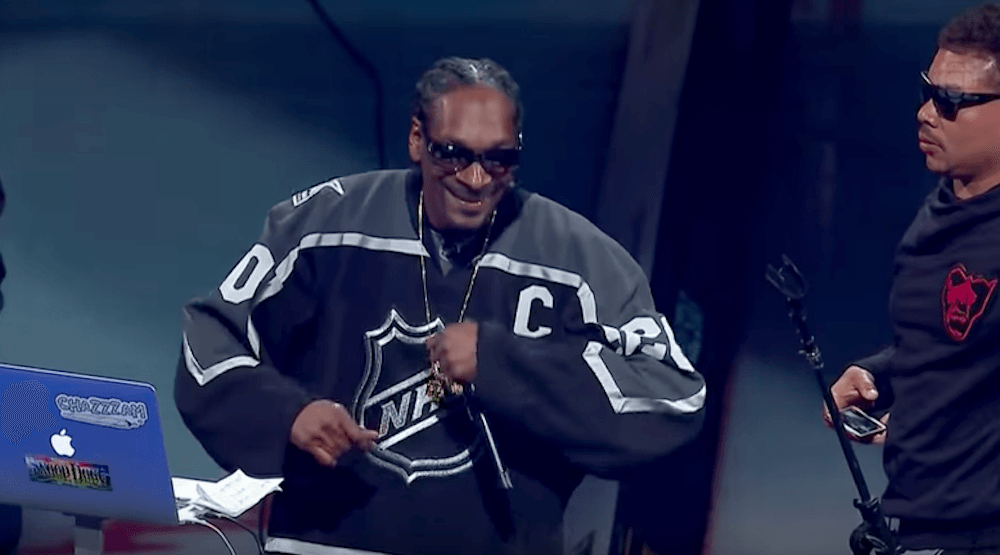 The 62nd edition of the NHL All-Star Game took place this weekend in Los Angeles. The game (or games, it’s a four-team tournament now) is what it is. The games are never going to have the kind of intensity you’d like to see.

For the second straight year, a 3-on-3 tournament with All-Star teams from each division ‘competed’ for a million dollar prize.

I could tell you that the Metropolitan Division beat the Pacific Division in the final, and that Wayne Simmonds took home the MVP honours, but do you care? Of course not!

Let’s talk about the fun stuff. The stuff away from the game.

The NHL doesn’t always have the easiest time attracting big name celebrities for their events.

They try ever year, but most times the names scream ‘B-list’. But not at this year’s All-Star Game.

Snoop Dogg got everyone on their feet during the player introductions at the Skills Competition on Saturday, DJ’ing at centre ice. His appearance was mostly all good times, although he created a minor stir by playing the Next Episode. What’s the big deal? Well, he did not play the radio edit, meaning some explicit language greeted everyone at Staples Center and on TV.

To his credit, he apologized (kinda):

But you know what? If you invite Snoop to your event, you’re going to get Snoop.

Speaking of getting what you ask for, Don Cherry was at the All-Star Game.

Cherry has hated the All-Star Game ever since I can remember. So much so, in fact, that he usually doesn’t even show up to them.

For whatever reason, he was at this one though.

Say what you want about Cherry, but he always tells it like it is (well, how he thinks it is, anyway). I often disagree with him, but his opinion on the All-Star Game was bang on:

It’s almost like players get it in their head that it’s not cool to skate hard or shoot the puck. So they float around and over-pass. Three-on-three works a little better, because they’re forced to skate a bit more and there’s fewer people to pass to.

Who could forget Scott Oake back in 2007 interviewing Snoop Dogg during the Stanley Cup Final in Anaheim.

Well Oake is back at it…

Also a lot of fun, seeing NHL stars (past and present), getting their photo taken with Snoop.

Also from Saturday, the celebrity game.

Justin Bieber played in the game and provided the best picture of the weekend when he got pummelled by 6-foot-6 menacing defenceman Chris Pronger in the corner.

"I was giving him a little back massage in the corner." – Chris Pronger on checking Justin Bieber.#NHLAllStar pic.twitter.com/LcnvwjozRk

Look at that grin from Pronger. Amazing.

If you haven’t seen the video, the only way to watch it is to the tune of “Baby”. Thank goodness Andy Cole has that covered:

The NHL revealed the list of the best 100 players in league history this weekend, as part of the 100th anniversary celebration. Many of the players were on hand in Los Angeles, which provided some great photo ops.

Here’s the three best players to ever play the game:

Phew, they made it! Lol. The Great One, Bobby Orr, and Mario Lemieux after the NHL released their 100 Greatest Players of all time. pic.twitter.com/ieWttIIu4j

“I don’t know if I can wash it anymore,” Burns said later.

The two best friends that anyone could have

Once mortal enemies (in the minds of fans, anyway), it appears that Sidney Crosby and Alex Ovechkin have become friends.

Ovechkin on if he is friends with Crosby now: "Yes. Best friends.” pic.twitter.com/yuMG1EUj7r

P.K Subban mic'd up bringing Crosby and Ovechkin together 😂👌🏻 pic.twitter.com/MnorlX6c0Q

Lastly, how awesome is it to have Wayne Gretzky back in the NHL in some capacity? Officially, he’s the centennial ambassador. But just having the Great One around is great for the game.

Gretzky filled in as head coach for the Metropolitan Division after John Tortorella stayed home to be with his ailing dog. He won a key coach’s challenge late in the final game, which was the turning point to his team winning.

Do you want to see the greatest player of all-time laughing his ass off after disallowing a goal in the All-Star Game?

Of course you do!

…and the water boy too.