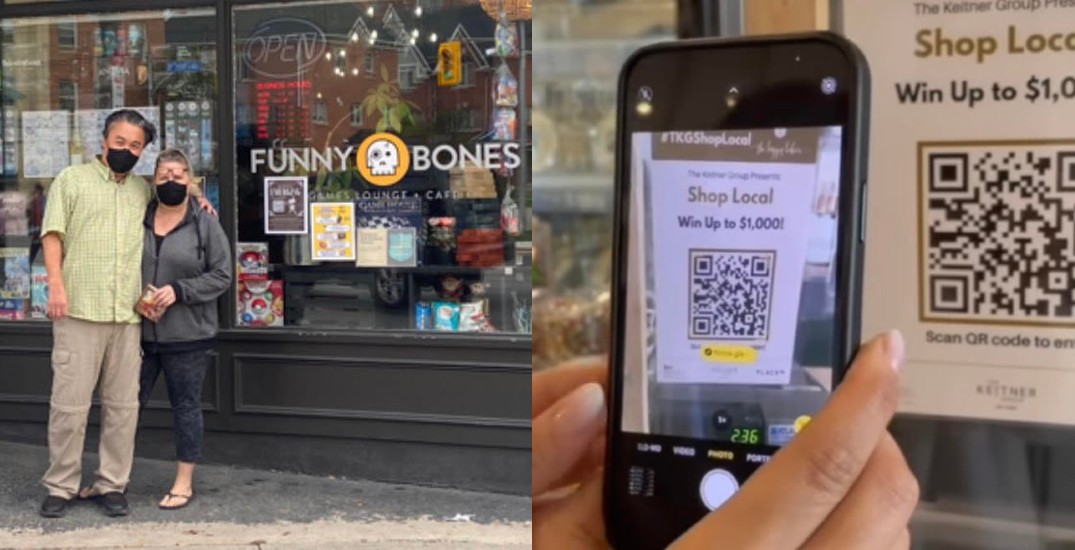 A new campaign in Toronto is giving out prizes to people supporting small local businesses, and you can win some serious cash while you shop.

The idea of #TKGShopLocal came from Joel Keitner, an Etobicoke real estate sales representative who started planning the campaign earlier this summer.

“Last year, I feared COVID-19 lockdowns were going to set the community back,” Keitner told Daily Hive. “Fortunately, these businesses continue to fight to succeed, because if not… we could have regressed. But instead of derelict and vacant storefronts, we have really incredible local shops run by amazing people. They really are heroes of the community.”

Keitner spoke to local business owners and, with the help of his team and his brother Austin, created a QR code system that allows shoppers to enter a draw when they make a purchase from a small business. All they have to do is upload their receipt, and if they’re lucky, they could win up to a grand.

#TKGShopLocal covers a number of establishments in Etobicoke, Mimico, Longbranch, and Lakeshore, but Keitner hopes to expand it to the rest of Toronto to encourage a culture of supporting small businesses.

“I think one of the most inspiring stories is from John Lee and Laurie Bradford, owners of Funny Bones Games Lounge + Cafe,” he told Daily Hive. “They left their corporate jobs to pursue their dream of opening a cafe/bar across the street from their home where community members of all ages could come play and have some fun.”

“The pandemic presented many challenges but also opportunities to branch out into various creative revenue streams such as virtual gaming events or corporate retreats where they come to you,” Keitner said. “I’m inspired by the resilience of their entrepreneurial spirit.”

You can enter the contest at any participating business until December 24. The draw’s results will be announced on December 30, and there are six prizes to be won: a $1,000 first prize, a $500 second prize, and four $250 prizes.