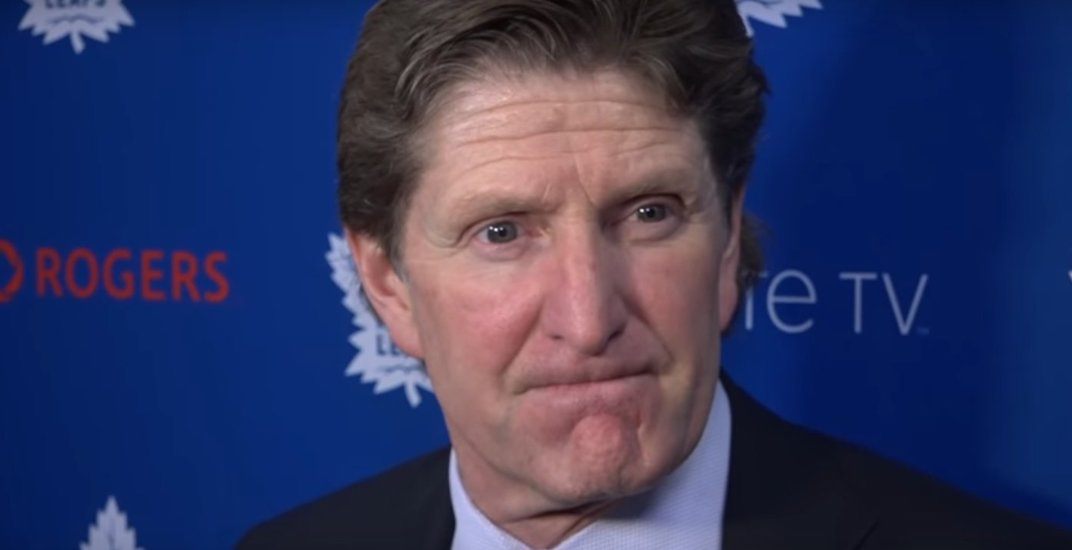 After a disappointing start to the season, the Toronto Maple Leafs have fired head coach Mike Babcock.

Sheldon Keefe has been promoted from his head coaching position with the AHL’s Toronto Marlies and will take over as the Leafs’ new bench boss.

Toronto Maple Leafs President and Alternate Governor Brendan Shanahan announced today that Mike Babcock has been relieved of his coaching duties and Sheldon Keefe has been named the Club’s new head coach. #LeafsForever

The 9-10-4 Maple Leafs currently sit two points back of a playoff spot in the Eastern Conference and are mired in a six-game losing streak.

“Today, we made the decision to relieve Mike Babcock of his coaching duties and named Sheldon Keefe our new head coach,” said Leafs President Brendan Shanahan. “Over parts of the last five seasons, Mike has played an integral role in changing the direction of our franchise.”

“Mike’s commitment and tireless work ethic has put our organization in a better place and we are extremely grateful and appreciative of the foundation he has helped us build here.”

The highest-paid head coach in the league, Babcock was in his fifth season behind the Leafs’ bench. He helped a young team rise to prominence, with Toronto making a surprise trip to the playoffs during his second season in 2016-17.

But consecutive first-round playoff exits at the hands of the Boston Bruins in 2018 and 2019 turned up the heat on Babcock despite back-to-back 100+ point regular seasons.

Babcock sits eighth all-time in coaching wins, collecting 700 of them with Anaheim, Detroit, and Toronto. But the 56-year-old hasn’t been past the first-round of the playoffs since 2013 and hasn’t made it to a Conference Final since back-to-back Stanley Cup Final appearances with the Red Wings in 2008 and 2009.

With Stanley Cup aspirations going into this season, the standard is high for the Leafs. The job of leading the team now belongs to Keefe, a 39-year-old Brampton native who doesn’t have any NHL experience on his resume apart from his playing days. Keefe, who appeared in 125 NHL games as a player, becomes the league’s second-youngest active coach.

“At this time, we collectively felt that it was best to make a change to Sheldon Keefe,” added Shanahan. “Sheldon’s record with the Marlies in terms of development and on-ice success during his time in our organization has compelled us all to feel that he is the right person to take us to the next stage in our evolution.”

Keefe had been the head coach of the Marlies since 2015, prior to which he coached the OHL’s Sault Ste. Marie Greyhounds. The Marlies have been a powerhouse every season under Keefe’s guidance, winning the Calder Cup in 2018.

While Babcock was a coach inherited by Leafs GM Kyle Dubas, Keefe is someone he knows well, as the pair worked together while with the Greyhounds.