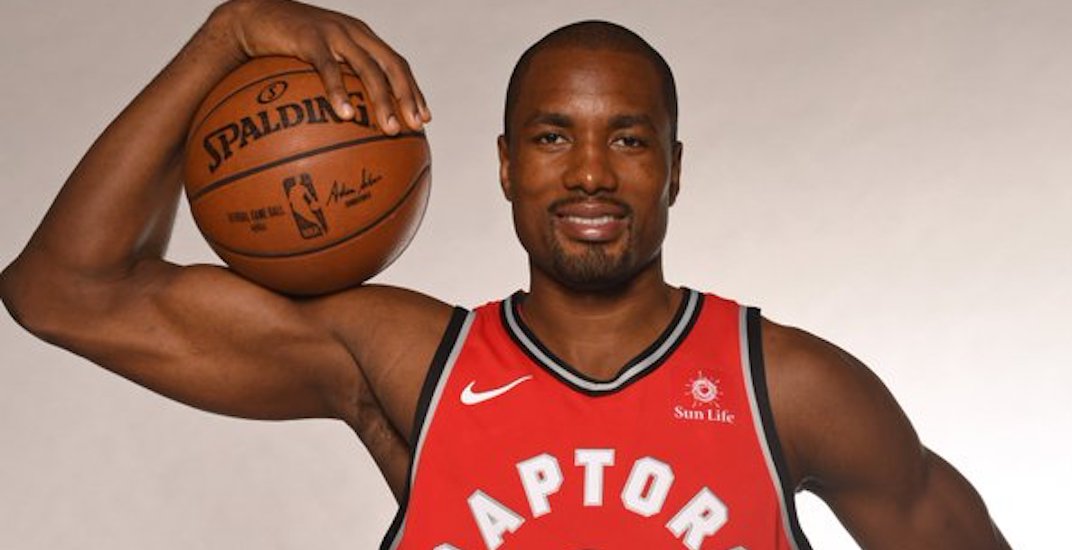 The Toronto Raptors lost a significant piece of their lineup on Saturday, with veteran centre Serge Ibaka taking his talents to the Los Angeles Clippers and the opportunity to be reunited with good friend and former teammate Kawhi Leonard.

Ibaka signed a two-year deal in L.A., which likely provided more stability than the Raptors, with most reports speculating Toronto was only willing and able to afford a one-year option.

After being acquired from Orlando in 2017, Ibaka quickly became fan a favourite. Playing 228 games in Toronto (177 as a starter), Ibaka put up 14.2 points and 7.4 rebounds a night and was widely respected league-wide as one of the game’s better forwards.

Business is business, as they say, and although the Raptors weren’t able to find a fit for him moving forward, Ibaka’s tenure in Toronto was a resounding success, capped off with the 2019 NBA championship.

Here’s a tribute to one of the most colourful characters to ever don a Toronto sports uniform:

Ibaka shared his thoughts on social media about his tenure in Toronto on Sunday afternoon.

“I feel really blessed to have played for this city, these fans, and this organization. The love I have received during this journey I will never forget,” Ibaka said in the post.

“So thank you Toronto. Thank you, Canada. And thank you Raptors. I am one of yours forever. #wethenorth”

While the NBA schedule and the return to Toronto is up in the air, whenever Ibaka does get a chance to play in front of a Canadian crowd once again, you can expect he’ll be getting nothing but a raucous standing ovation. Although fans are sad to see him go, it’s hard to picture anything but a lasting mutual respect being Ibaka’s legacy in Toronto.

Though Ibaka can contribute offensively, he’s best known for being a great rim protector who is sitting 9th all time on the list of playoff leaders in blocks. Every single player on the list ahead of him has been enshrined in the Hall of Fame, although Ibaka might have some work left to do to reach that level.

Still, Ibaka’s got a 14-minute video below just about his defensive work alone.

Of course, there’s his great Game 7 performance against Philadelphia, where he put up 17 points (including a trio of three pointers). Leonard had 41 points (and the most famous shot in team history), but no Raptor other than Ibaka put up more than 11 points in what was ultimately a fairly low-scoring 92-90 victory.

And when it came to his second NBA Finals appearance (after reaching the Finals with Oklahoma City in 2012), Ibaka showed up once again. In a Game 4 victory that put Toronto up 3-1 in the series over Golden State, Ibaka put up 20 points and four rebounds along with two blocks in a real statement victory.

How versatile are you?

Of course, Ibaka was loved as much, if not more, for his off-court persona. His peak was undoubtedly getting the notoriously quiet Kawhi Leonard to open up on his “How Hungry are You?” internet cooking show, which featured numerous teammates and opponents from around the NBA.

On the more serious side of things, Ibaka produced a documentary about his life growing up in Brazzaville, in the Republic of the Congo and his journey to the NBA.

The good news for the Raptors is that at least four starters in Fred VanVleet, Kyle Lowry,  OG Anunoby and Pascal Siakam are all returning under contract for next season.

At time of writing, Marc Gasol remained unsigned, with Toronto and the L.A. Lakers as his top targets, per The Athletic’s Shams Charania (*Update: Gasol is indeed a Laker now).

Journeyman centre Aron Baynes could also be an option (*Update: Baynes has signed with the Raptors), as well as names like DeMarcus Cousins or Hassan Whiteside that remain on the free agency market. However, whatever the Raptors end up doing, it’s very likely their big man rotation will see a downgrade this coming season.

But if all else fails, there’s nothing wrong with letting the internal talent shine. The 2019 championship team featured no big-name free agents, and famously didn’t feature a single pick in the draft higher than Leonard at 15. Canadian centre Chris Boucher could see a bump in his usage, after showing glimpses of being a

If this era of the Toronto Raptors has shown anything, it’s that great development and drive can often make up for a perceived lack of talent.